The Animal kingdom entails all the different animals which are either multicellular or eukaryotic. Some of the characteristics of the majority of the animals are: 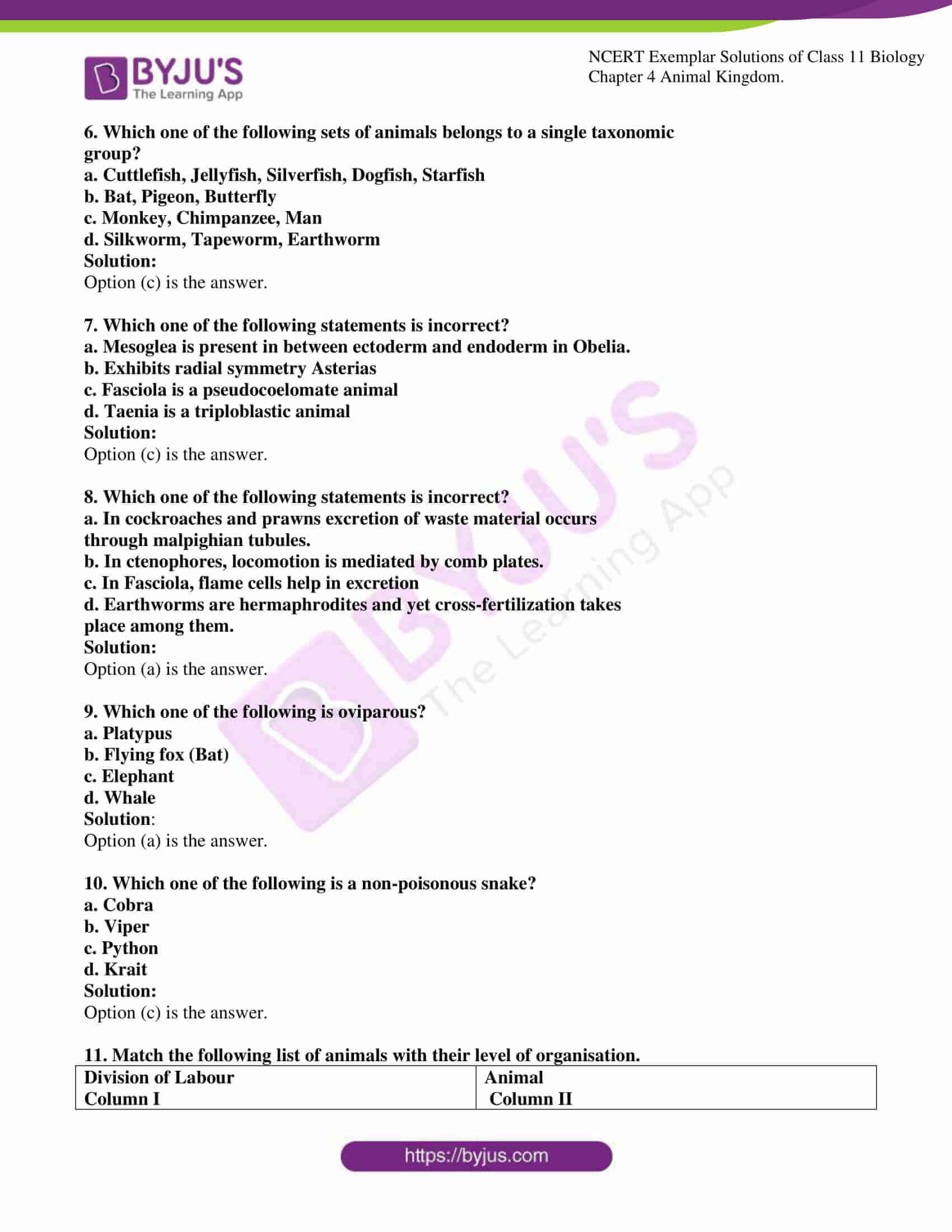 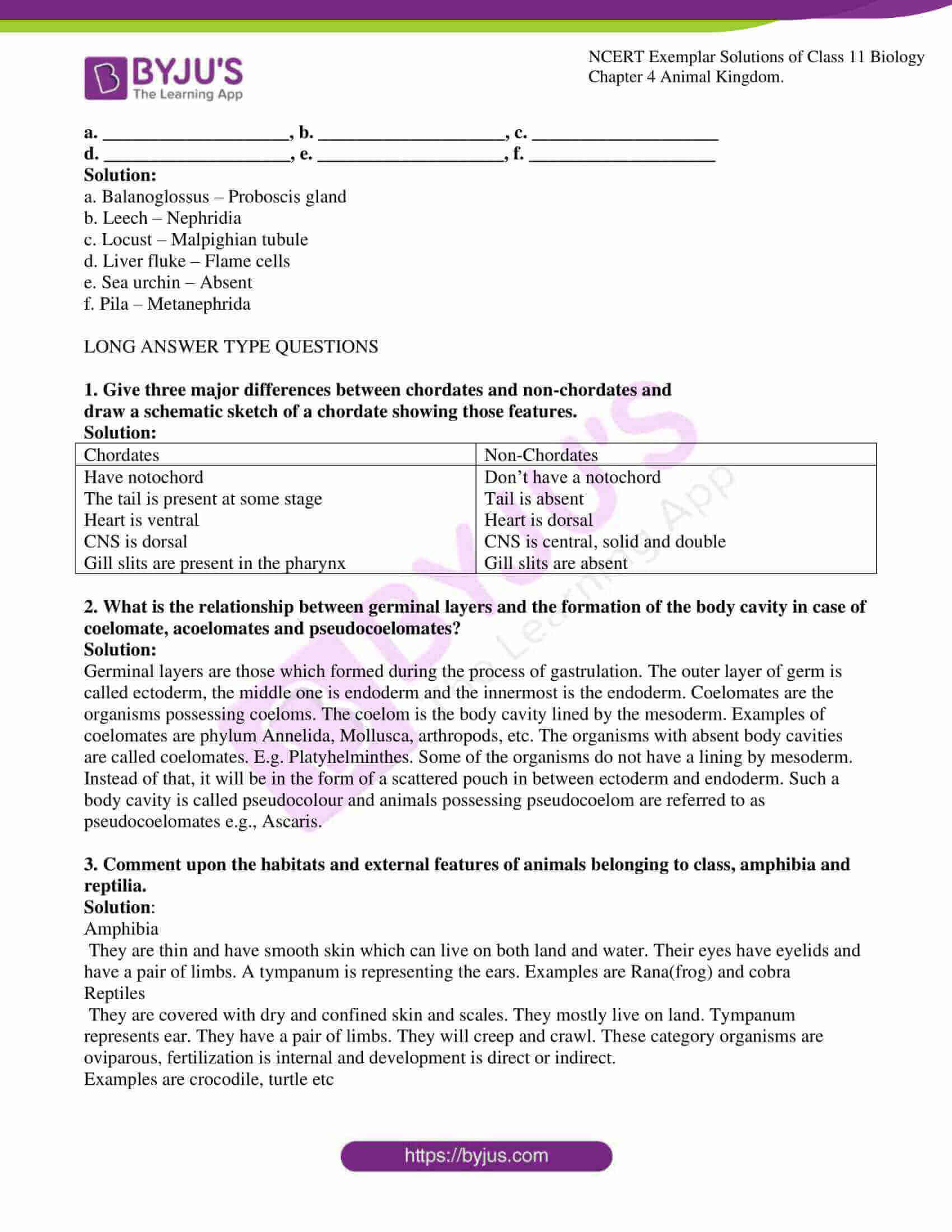 1. In some animal groups, the body is found divided into compartments

with a serial repetition of at least some organs. This characteristic feature

2. Given below are types of cells present in some animals. Which of the

3. Which one of the following sets of animals shares a four-chambered

4. Which of the following pairs of animals has non-glandular skin

a? Snake and Frog

b. Chameleon and Turtle

5. Birds and mammals share one of the following characteristics as a

6. Which one of the following sets of animals belongs to a single taxonomic

7. Which one of the following statements is incorrect?

a. Mesoglea is present in between ectoderm and endoderm in Obelia.

c. Fasciola is a pseudocoelomate animal

d. Taenia is a triploblastic animal

8. Which one of the following statements is incorrect?

a. In cockroaches and prawns excretion of waste material occurs

b. In ctenophores, locomotion is mediated by comb plates.

d. Earthworms are hermaphrodites and yet cross-fertilization takes

9. Which one of the following is oviparous?

10. Which one of the following is a non-poisonous snake?

11. Match the following list of animals with their level of organisation.

Choose the correct match showing the division of labour with animal example.

12. The body cavity is the cavity present between the body wall and the gut wall. In

some animals, the body cavity is not lined by mesoderm. Such animals

13. Match the column A with column B and choose the correct option

1. Identify the phylum in which adults exhibit radial symmetry and larva

2. What is the importance of pneumatic bones and air sacs in Aves?

Pneumatic bones make their body lightweight and facilitate the flying and air sacs are helpful in respiration and buoyancy.

3. What is metagenesis? Mention an example which exhibits this phenomenon.

The phenomenon of alternation of generations between sexual and asexual mode of reproduction is called metagenesis.

4. What is the role of feathers?

In aves, besides pneumatic bones, feathers are also helpful in making the body weigh lighter and help in flight.

5. Which group of chordates possess sucking and circular mouth without jaws?

Cyclostomes possess sucking and circular mouth without jaws. Since their mouth is circular and lacks jaws, they are also called agnathans.

6. Give one example each for an animal possessing placoid scales and that with cycloid scales.

Placoid scales are the tiny tough scales that cover the skin. Examples are Trygon, Pritis

Cycloid scales are characterized by having a smooth outer margin. Examples are Catla, Clarias

Internal fertilization (makes the chances of the survival of young ones better). The body is covered with dry and cornified skin and epidermal scales.

8. Mention one example each for animals with a chitinous exoskeleton and those covered by a calcareous shell.

9. What is the role of the radula in molluscs?

The radula is a special structure in molluscs which is used to scrape and scratch the food and to create a depression in rocks which molluscs use as their habitat.

10. Name the animal, which exhibits the phenomenon of bioluminescence. Mention the phylum to which it belongs.

The phenomenon of production and emission of light by an organism as a result of a chemical reaction during which chemical energy is converted to light energy is called bioluminescence. Members of the phylum ctenophores like Ctenoplana, Velamen, Beroe, etc.

11. Write one example each of the following in the space provided.

The triploblastic animal is those which the developing embryo has a third germinal layer. Example: Chordates.

13. Give an example of the following

a. A blood-filled cavity in arthropods: Haemocoel

b. Free-floating form of cnidaria: Medusa

b. Oviparous and viviparous characteristic

2. Sort out the animals on the basis of their symmetry (radial or bilateral) coelenterates, ctenophores, annelids, arthropods, and echinoderms.

In radial symmetry, the body of an individual can be divided into equal halves by any plans passing through the longitudinal axis. Radial symmetry: Coelenterates, Ctenophores, Echinoderms

3. There has been an increase in the number of chambers in the heart during the evolution of vertebrates. Give the names of the class of vertebrates having two, three or four-chambered heart.

4. Fill up the blank spaces appropriately

F = Amphibians have kidneys as their excretory organs

6. Endoparasites are found inside the host body. Mention the special structure, possessed by these and which enables them to survive in those conditions.

For the survival of that condition they have to adapt:

Presence of adhesive organs or suckers to cling on to the host.

7. Match the following and write correct choice in space provided

a. Pila – Presence of shell

a. Open and closed circulatory system

b. Oviparity and viviparity

d) The animal possessing no coelom are called coelomates whereas the body cavity lined by mesoderm instead mesoderm is present in between ectoderm and endoderm are called pseudocoelomate.

9. Give the characteristic features of the following citing one example of each

a. Chondrichthyes and Osteichthyes

Their habitat is mainly marine and their body is streamlined. They have a cartilaginous endoskeleton.

Examples are scoliosis and Trygon

The habitat is both marines as well as freshwater and they have a streamlined body. The endoskeleton is bony.

In urochordates, the notochord is present only in the larval tail but in cephalochordates, notochord extends from head to tail region and is persistent throughout the life.

a. Aves and mammals

b. A frog and crocodile

c. A turtle and pila

b) A frog and crocodile are cold-blooded and are oviparous

c) Turtle and pilla are cold-blooded and are oviparous animals

a. A limbless animal

b. A cold-blooded animal

e. An animal having a canal system and spicules

f. An animal with cnidoblasts

a. A limbless animal – Icthyophis

b. A cold-blooded animal – Trygon

e. An animal having a canal system and spicules – Euspongia

f. An animal with cnidoblasts – Hydra

12. Give an example for each of the following

a. A viviparous animal

b. A fish possessing a poison sting

d. An organ, which regulates buoyancy

a. A viviparous animal – Panthera leo

b. A fish possessing a poison sting – Trygon

13. Excretory organs of different animals are given below. Choose correctly and write in the space provided.

draw a schematic sketch of a chordate showing those features.

2. What is the relationship between germinal layers and the formation of the body cavity in case of coelomate, acoelomates and pseudocoelomates?

Germinal layers are those which formed during the process of gastrulation. The outer layer of germ is called ectoderm, the middle one is endoderm and the innermost is the endoderm. Coelomates are the organisms possessing coeloms. The coelom is the body cavity lined by the mesoderm. Examples of coelomates are phylum Annelida, Mollusca, arthropods, etc. The organisms with absent body cavities are called coelomates. E.g. Platyhelminthes. Some of the organisms do not have a lining by mesoderm. Instead of that, it will be in the form of a scattered pouch in between ectoderm and endoderm. Such a body cavity is called pseudocolour and animals possessing pseudocoelom are referred to as pseudocoelomates e.g., Ascaris.

3. Comment upon the habitats and external features of animals belonging to class, amphibia and reptilia.

They are thin and have smooth skin which can live on both land and water. Their eyes have eyelids and have a pair of limbs. A tympanum is representing the ears. Examples are Rana(frog) and cobra

They are covered with dry and confined skin and scales. They mostly live on land. Tympanum represents ear. They have a pair of limbs. They will creep and crawl. These category organisms are oviparous, fertilization is internal and development is direct or indirect.

4. Mammals are most adapted among the vertebrates. Elaborate.

Mammals are found in a variety of habitats like deserts, plains and mountains. They differ in the type of jaws and sexes are separate and fertilization is internal. They have pairs of limbs which are used for walking, burrowing, climbing etc. Their mammary glands produce milk to nourish their young ones. They are warm-blooded which helps them maintain their body temperature in different weather conditions. They have hair-like structures which act as insulation against cold. The 4-chambered heart is present in mammals. The brains are more developed. Examples of Mammals: Humans, Whales, Dogs, Camels, etc