NCERT Exemplar for Class 11 Biology Chapter 17 Breathing and Exchange of Gases is available here in the form of pdf to download. Students are advised to study this exemplar solution in order to understand the topic clearly and to score good marks in Class 11 CBSE examination and NEET exams.

NCERT Exemplar for Class 11 Biology Chapter 17 pdf is important for it contains answers to NCERT exemplar book, answers to questions in previous year questions and various other questions like MCQs, fill in the blanks, match the following and true or false questions. 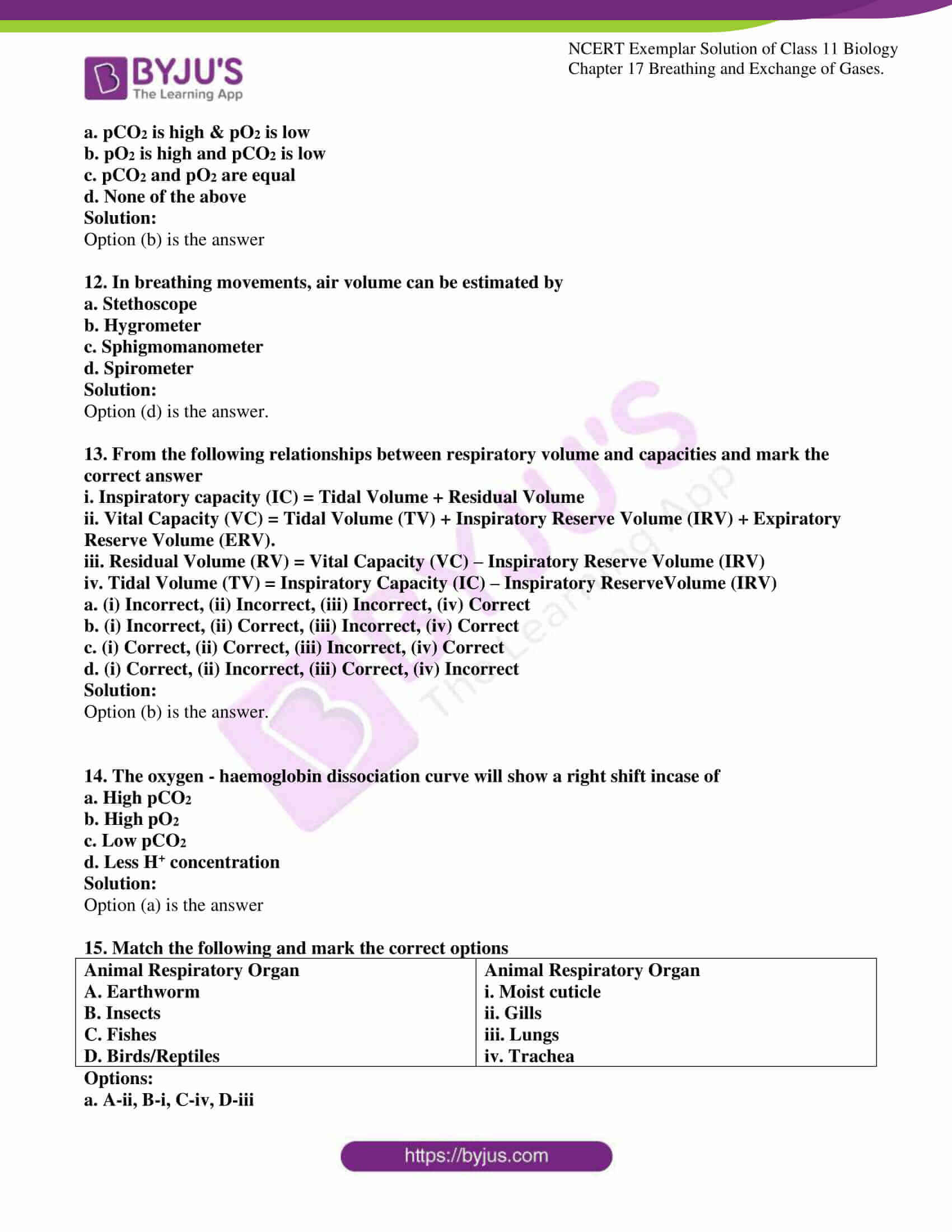 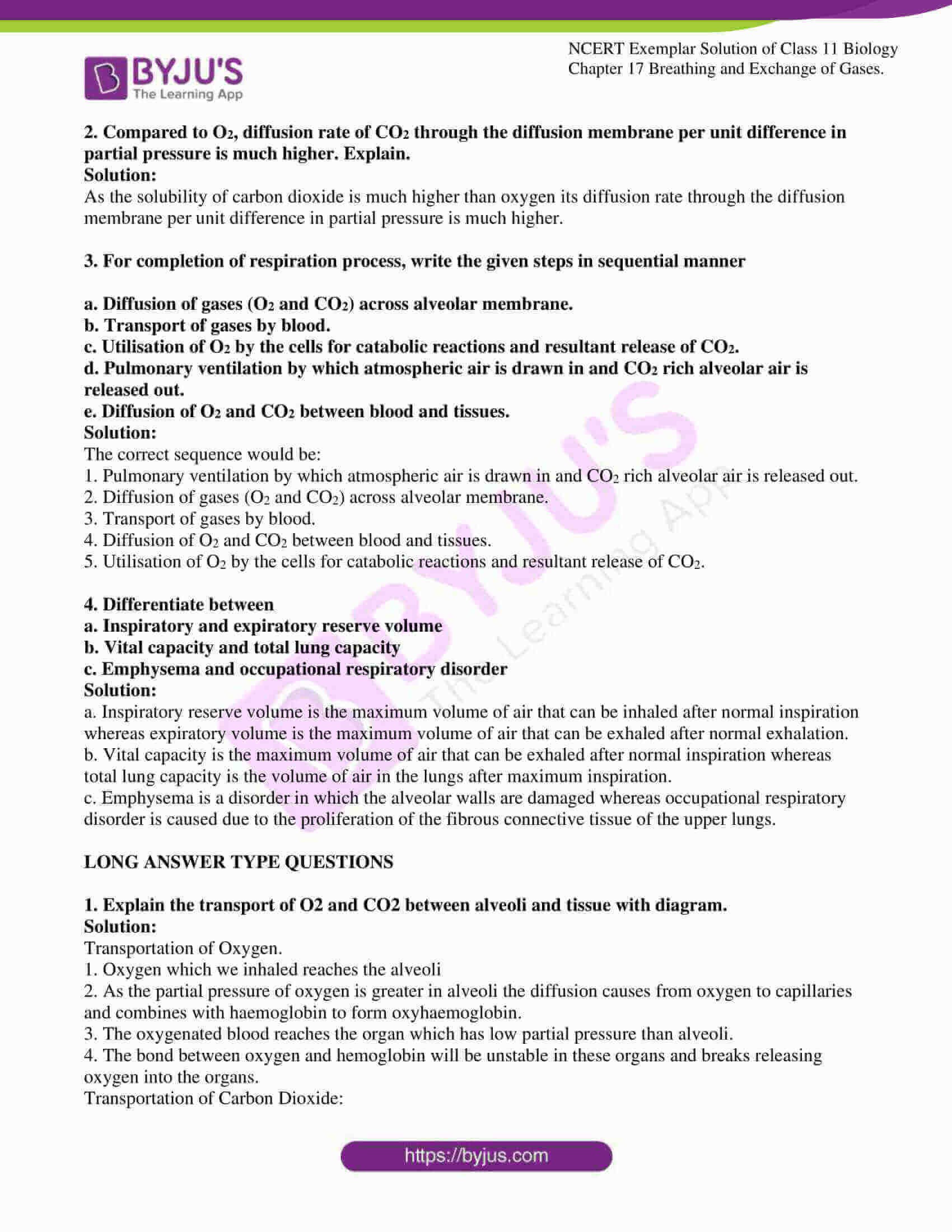 1. Respiration in insects is called direct because

a. The cell exchange O2/ CO2 directly with the air in the tubes

b. The tissues exchange O2/ CO2 directly with coelomic fluid

c. The tissues exchange O2/ CO2 directly with the air outside through

then exchange with tissues

2. Regarding the functions of our respiratory system, mark the wrong entry.

a. Humidifies the air

b. Warms up the air

d. Cleans up the air

3. A person suffers punctures in his chest cavity in an accident without any

damage to the lungs. Its effect could be

b. Rapid increase in breathing rate

c. No change in respiration

4. It is known that exposure to carbon monoxide is harmful to animals

a. It reduces CO2 transport

b. It reduces O2 transport

5. Mark the true statement among the following with reference to normal

6. A person breathes in some volume of air by forced inspiration after having

a forced expiration. This quantity of air taken in is

7. Mark the incorrect statement in context to O2 binding to Hb

8. Which of the following statements is incorrect regarding respiratory

a. Each terminal bronchiole give rise to a network of bronchi.

b. the alveoli are highly vascularised.

c. The lungs are covered by a double-layered membrane.

d. The plecral fluid reduces friction on the lung surface.

9. Incidence of Emphysema – a respiratory disorder is high in cigarette

smokers. In such cases

a. The bronchioles are found damaged

b. The alveolar walls are found damaged

10. Respiratory process is regulated by certain specialized centres in the

brain. One of the following centres can reduce the inspiratory duration

11. CO2 dissociates from carbaminohaemoglobin when

Option (b) is the answer

12. In breathing movements, air volume can be estimated by

13. From the following relationships between respiratory volume and capacities and mark the correct answer

14. The oxygen – haemoglobin dissociation curve will show a right shift incase of

Option (a) is the answer

15. Match the following and mark the correct options

a. Tidal Volume: Volume of air inhaled and exhaled during a normal breathing cycle without any forced breathing is tidal volume.

b. Residual Volume: Volume of air left in the lungs even after forced exhalation is called as residual volume.

c. Asthma: It is an inflammatory disease of the airways of the lungs

2. A fluid filled double membranous layer surrounds the lungs. Name it and mention its important function.

3. Name the primary site of exchange of gases in our body?

The primary site of exchange of gases in our body is Alveoli.

Excessive cigarette smoking leads to Emphysema due to the presence of various harmful chemicals like nicotine, tar, sulphur etc. Alveoli walls get damaged due to this.

5. What is the amount of O2 supplied to tissues through every 100 ml. of oxygenated blood under normal physiological conditions?

The amount of O2 supplied to tissues through every 100 ml. of oxygenated blood under normal physiological conditions is around 5ml.

7. Arrange the following terms based on their volumes in an ascending order

9. Name the organs of respiration in the following organisms:

a. Surface of the body

10. Name the important parts involved in creating a pressure gradient between lungs and the atmosphere during normal respiration.

2. Internal Intercostal Muscles of the ribs

3. External Intercostal Muscles of the ribs

1. State the different modes of CO2 transport in blood.

1. In Red blood cells carbon dioxide combines with water and forms carbonic acid. It is an unstable form and gets disassociated into hydrogen and bicarbonate ion.

2. Carbon dioxide is also transported through plasma in the form of bicarbonate ions.

2. Compared to O2, diffusion rate of CO2 through the diffusion membrane per unit difference in partial pressure is much higher. Explain.

3. For completion of respiration process, write the given steps in sequential manner

a. Diffusion of gases (O2 and CO2) across alveolar membrane.

b. Transport of gases by blood.

c. Utilisation of O2 by the cells for catabolic reactions and resultant release of CO2.

d. Pulmonary ventilation by which atmospheric air is drawn in and CO2 rich alveolar air is released out.

e. Diffusion of O2 and CO2 between blood and tissues.

The correct sequence would be:

1. Pulmonary ventilation by which atmospheric air is drawn in and CO2 rich alveolar air is released out.

2. Diffusion of gases (O2 and CO2) across alveolar membrane.

3. Transport of gases by blood.

4. Diffusion of O2 and CO2 between blood and tissues.

5. Utilisation of O2 by the cells for catabolic reactions and resultant release of CO2.

a. Inspiratory and expiratory reserve volume

c. Emphysema is a disorder in which the alveolar walls are damaged whereas occupational respiratory disorder is caused due to the proliferation of the fibrous connective tissue of the upper lungs.

1. Explain the transport of O2 and CO2 between alveoli and tissue with diagram.

1. Oxygen which we inhaled reaches the alveoli

2. As the partial pressure of oxygen is greater in alveoli the diffusion causes from oxygen to capillaries and combines with haemoglobin to form oxyhaemoglobin.

3. The oxygenated blood reaches the organ which has low partial pressure than alveoli.

4. The bond between oxygen and hemoglobin will be unstable in these organs and breaks releasing oxygen into the organs.

1. The carbon dioxide which is released is carried out by various organs to the alveoli via capillaries which have lower intra pulmonary pressure than the organs.

3. In Red blood cells carbon dioxide combines with water and forms carbonic acid. It is an unstable form and gets disassociated into hydrogen and bicarbonate ion.

4. Carbon dioxide is also transported through plasma in the form of bicarbonate ions. 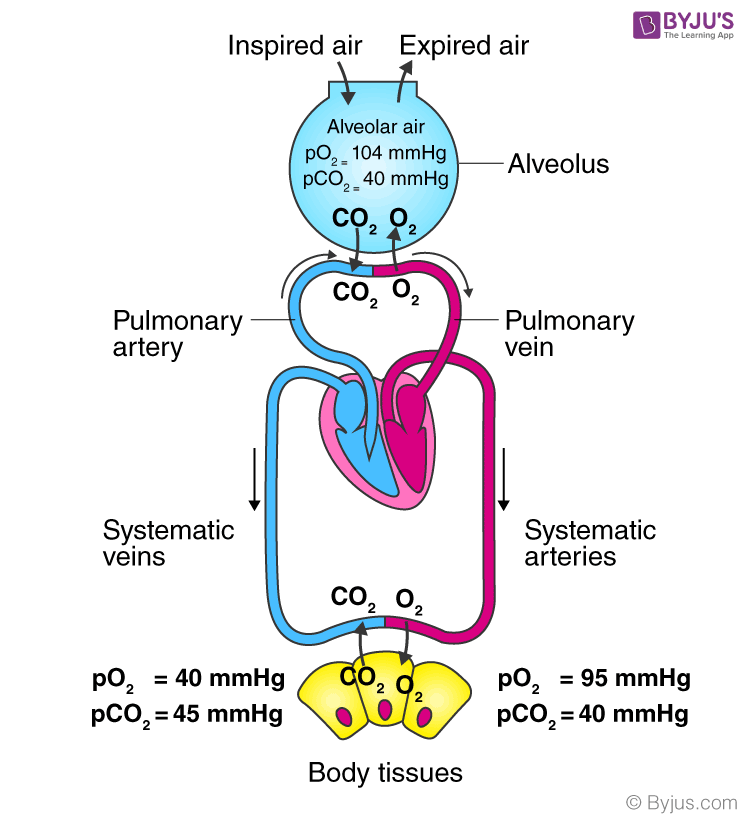 2. Explain the mechanism of breathing with neat labelled sketches.

Which further decrease the intra pulmonary pressure less than the atmospheric pressure and causes the entry of external oxygen into lungs called inspiration.

B. Expiration: Expiration begins when the diaphragm relaxes. This leads to a decreased volume of thoracic chamber. After which the intercostal muscles relaxes and leads to the relaxation of ribs and sternum which also decreases the volume of the thoracic chamber which then increases the pulmonary pressure less than the atmospheric pressure and cause exit of external oxygen called expiration. 3. Explain the role of neural system in regulation of respiration.

There are various centres in the neural system that plays significant a role in the regulation and control of respiration. Those are:

It is present in the dorsal part (back) of the pons varoli of the brain. It decreases the time duration of the inspiration and alter the respiration rate.

It is present in the medulla of the brain. It regulates the respiratory rhythm.

3. Apneustic centre is present in the lower part of the pons varoli of the brain. It increases the duration of inspiration.

4. Chemosensitive centre is present in the medulla oblongata and the pons area of the brain.

Breathing and exchange of gases talk about the process of respiration in which animals and mammals take in oxygen and let out carbon dioxide. Oxygen goes into the lungs and carbon dioxide is let out as a by-product. This process is essential for the survival of any species and is termed as ‘Respiration’.

Important topics of Chapter 17 Breathing and Exchange of Gases