Excretory Products and their elimination talk about the process of elimination of waste products which are the byproducts of metabolism and other non-useful materials. Besides the urethra, the male and female excretory system is practically the same. The excretory system in a human body contains the following different parts: 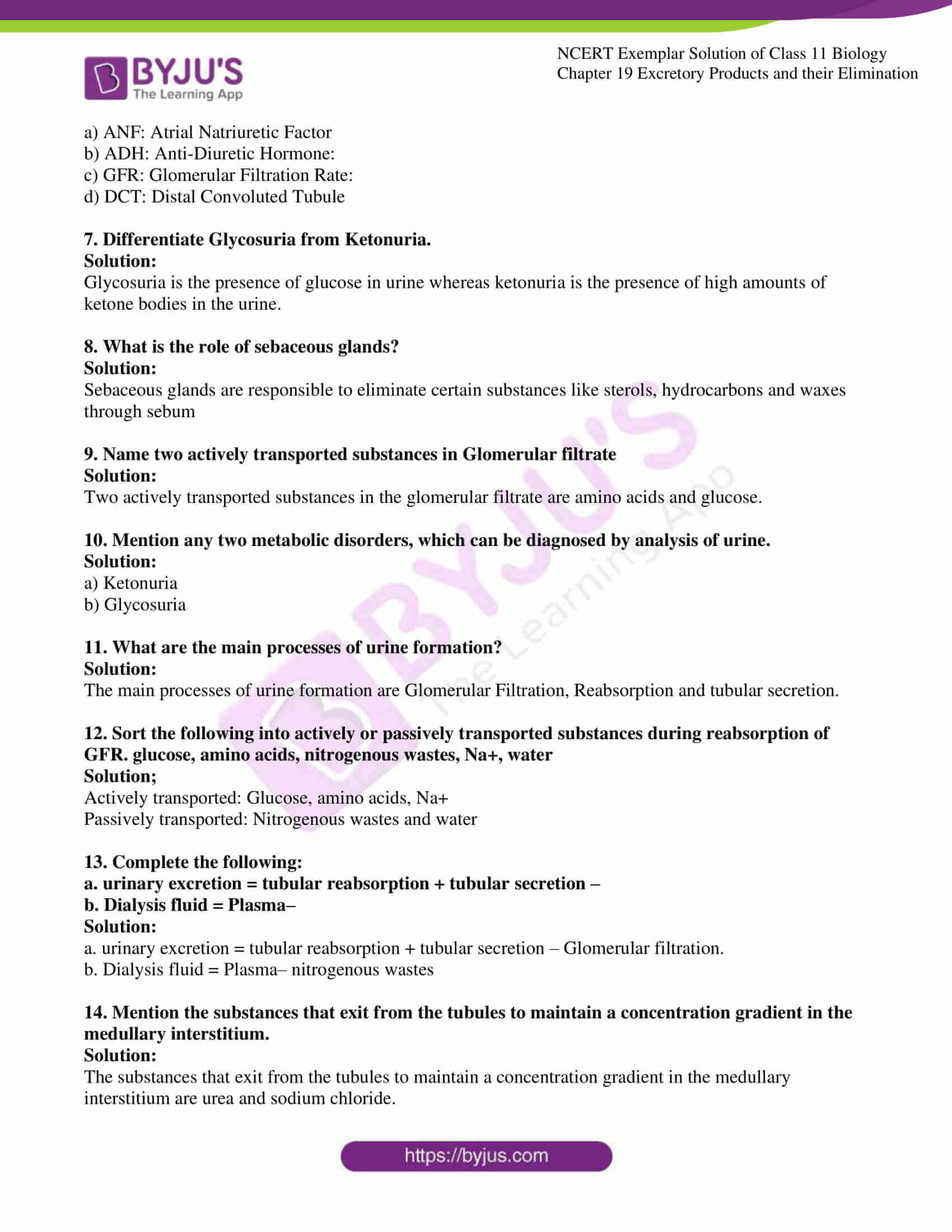 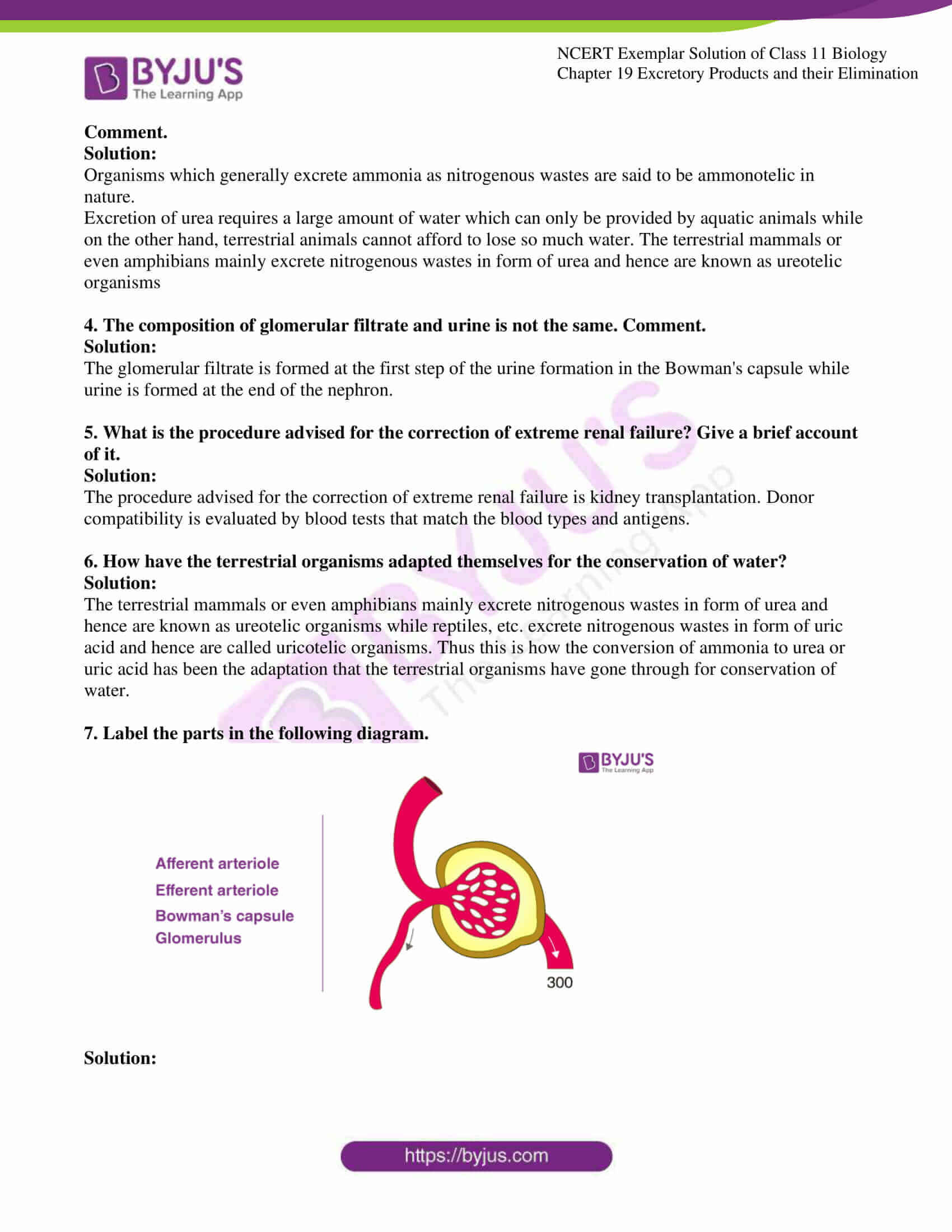 1. The following substances are the excretory products in animals. Choose

the least toxic form among them?

2. Filtration of the blood takes place at

3. Which of the following statements is correct?

a. ADH – prevents the conversion of angiotensinogen in the blood to angiotensin

4. Which of the following is removed from our body by lungs?

5. The pH of human urine is approximately

6. Different types of excretory structures and animals are given below. Match

them appropriately and mark the correct answer from among those

7. Which one of the following statements is incorrect?

a. Birds and land snails are uricotelic animals.

b. Mammals and frogs are ureotelic animals

d. Birds and reptiles are ureotelic

8. Which of the following pairs is wrong?

9. Which one of the following statements is incorrect?

a. The medullary zone of the kidney is divided into a few conical masses

b. Inside the kidney, the cortical region extends in between the

c. Glomerulus along with Bowman’s capsule is called the renal

convoluted tubule (DCT) of the nephron are situated in the cortical

region of the kidney.

10. The condition of accumulation of urea in the blood is termed as

11. Which one of the following is also known as an antidiuretic hormone?

12. Match the terms given in Column I with their physiological processes

given in Column II and choose the correct answer

13. Match the abnormal conditions given in Column A with their explanations

given in Column B and Choose the correct option

14. We can produce a concentrated/ dilute urine. This is facilitated by a

a. Reabsorption from PCT

b. Reabsorption from Collecting Duct

as plasma except that it has

1. Where does the selective reabsorption of Glomerular filtrate take place?Solution:

2. What is the excretory product from kidneys of reptiles?

The excretory product from kidneys of reptiles is uric acid.

3. What is the composition of sweat produced by sweat glands?

The composition of sweat produced by sweat glands is lactic acid, salt, minerals and urea.

4. Identify the glands that perform the excretory function in prawns.

The glands that perform the excretory function in prawns is the antennal glands or the green glands.

5. What is the excretory structure in amoeba?

The excretory structure in amoeba is the contractile vacuole.

6. The following abbreviations are used in the context of excretory functions, what do they stand for?

8. What is the role of sebaceous glands?

Sebaceous glands are responsible to eliminate certain substances like sterols, hydrocarbons and waxes through sebum

Two actively transported substances in the glomerular filtrate are amino acids and glucose.

10. Mention any two metabolic disorders, which can be diagnosed by analysis of urine.

11. What are the main processes of urine formation?

The main processes of urine formation are Glomerular Filtration, Reabsorption and tubular secretion.

14. Mention the substances that exit from the tubules to maintain a concentration gradient in the medullary interstitium.

The substances that exit from the tubules to maintain a concentration gradient in the medullary interstitium are urea and sodium chloride.

a) Kidneys – Urea, uric acid, ammonia (based on organisms but usually urea like in human beings)

1. Show the structure of a renal corpuscle with the help of a diagram. 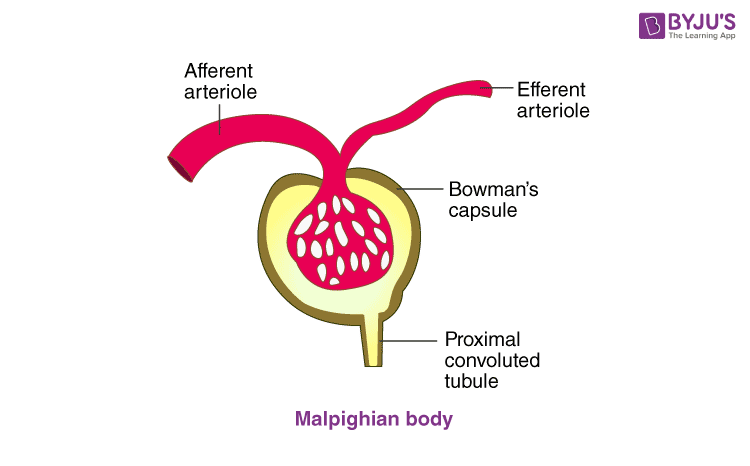 2. What is the role played by Renin-Angiotensin in the regulation of kidney function?

3. Aquatic animals generally are ammonotelic in nature whereas terrestrial forms are not. Comment.

Organisms which generally excrete ammonia as nitrogenous wastes are said to be ammonotelic in nature.

Excretion of urea requires a large amount of water which can only be provided by aquatic animals while on the other hand, terrestrial animals cannot afford to lose so much water. The terrestrial mammals or even amphibians mainly excrete nitrogenous wastes in form of urea and hence are known as ureotelic organisms

4. The composition of glomerular filtrate and urine is not the same. Comment.

5. What is the procedure advised for the correction of extreme renal failure? Give a brief account of it.

The procedure advised for the correction of extreme renal failure is kidney transplantation. Donor compatibility is evaluated by blood tests that match the blood types and antigens.

6. How have the terrestrial organisms adapted themselves for the conservation of water?

The terrestrial mammals or even amphibians mainly excrete nitrogenous wastes in form of urea and hence are known as ureotelic organisms while reptiles, etc. excrete nitrogenous wastes in form of uric acid and hence are called uricotelic organisms. Thus this is how the conversion of ammonia to urea or uric acid has been the adaptation that the terrestrial organisms have gone through for conservation of water.

7. Label the parts in the following diagram. 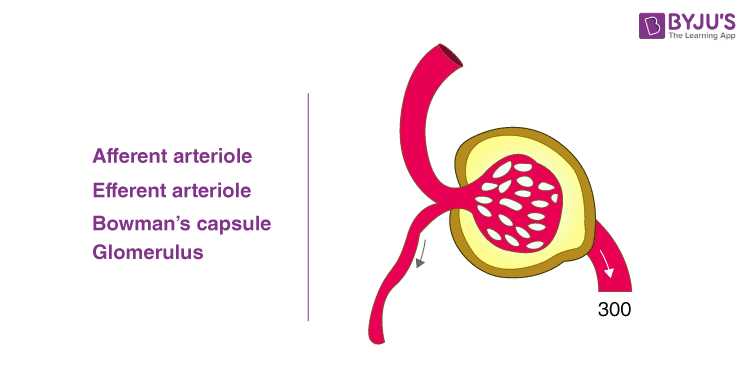 8. Explain, why a haemodialysis unit called an artificial kidney?

A haemodialysis unit is also called an artificial kidney because it is responsible for performing the same functions that a kidney functions.

Selective reabsorption is the process in which some molecules like glucose, ions and certain amino acids get reabsorbed from the filtrate as they pass through the neuron. ADH i.e. Antidiuretic hormone and ANF i.e. Atrial Natriuretic Factor are the hormones which monitor the function of the kidney. ADH functions as the facilitation of the reabsorption of water from DCT. The adrenal cortex is activated by Angiotensin II as a result of which aldosterone is released. Aldosterone, in turn, induces the DCT to absorb more ions and water. ANF regulates blood flow by causing vasodilation and increasing excretion of sodium.

1. Explain the mechanism of formation of concentrated urine in mammals.

The Henle’s loop and vasa recta play an important role in the formation of concentrated urine. The transport of sodium chloride in the ascending limb of Henle’s loop results in an osmolar gradient. The creation of a hypertonic medulla is facilitated by the renal tubules and vasa recta in the following manner: There is an active absorption of urea that occurs from the collecting tubule. In the vasa recta, absorption of water into the blood takes place and return of the absorbed solute to the interstitium follows. This is called the countercurrent exchange mechanism.

2. Draw a labelled diagram showing reabsorption and secretion of major substances at different parts of the nephron. 3. Explain briefly, micturition and disorders of the excretory system

The functional unit of the kidney is nephron where the urine is formed and followed by the urinary bladder. The urine will be stored until a voluntary signal is given by the central nervous system. his signal stretched the urinary bladder as it gets filled with urine. In response, the stretch receptors on the bladder walls would now send signals to the CNS that passes on motor messages that would lead to contraction of the muscles of the bladder leading to relaxation of the sphincter. This releases the urine and this process is called micturition.

Disorders of the excretory system:

It is the inflammation of the glomeruli of the kidney

This disorder is due to the formation of stone-like calcium oxalate which results in kidney stones.

4. How does tubular secretion help in maintaining ionic and acid-base balance in body fluids?

Tubular secretion is crucial as it helps in the maintenance of ionic balance in the body fluids.

During urine formation, Proximal Convoluted Tubule maintains the pH and ionic balance of the body fluids by selective secretion. Distal Convoluted Tubule is where conditional reabsorption of sodium ions and water takes place and maintain the ionic balance and pH. Collecting Duct: From this long duct, large amounts of water could be reabsorbed to produce concentrated urine.

5. The glomerular filtrate in the loop of Henle gets concentrated in the descending and then gets diluted in the ascending limbs. Explain.

6. Describe the structure of a human kidney with the help of a labelled diagram.

The kidney is a reddish-brown coloured organ which is a bean-shaped located between the last thoracic and third lumbar vertebra near the abdominal cavity. The hilum is a notch which is present in the inner side of the kidney through which ureter, blood vessels and nerves enter. Columns of Bertini and an inner medulla divided into medullary pyramids projecting into the calyx which is inside the kidney. The glomerulus and the renal tubule are the two functional units of the nephron. The renal tubule starts with a cup-like structure called Bowman’s capsule, by the glomerulus is enclosed and together they are called the renal corpuscle. Then it is followed by proximal convoluted tubule (PCT) followed by a hairpin shaped Henle’s loop having a descending and an ascending limb. The ascending limb continues as another highly coiled tubular structure called distal convoluted tubule (DCT). The DCTs open into a tube called a collecting duct.