NCERT Exemplar for Class 11 Biology Chapter 18 Body Fluids and Circulation are framed by our team of subject experts with an objective to guide the students in their exam preparations. By practising questions from Class 11 NCERT exemplars for chapter 18, students can gain more information about the chapter and can also have a quick review before their finals. 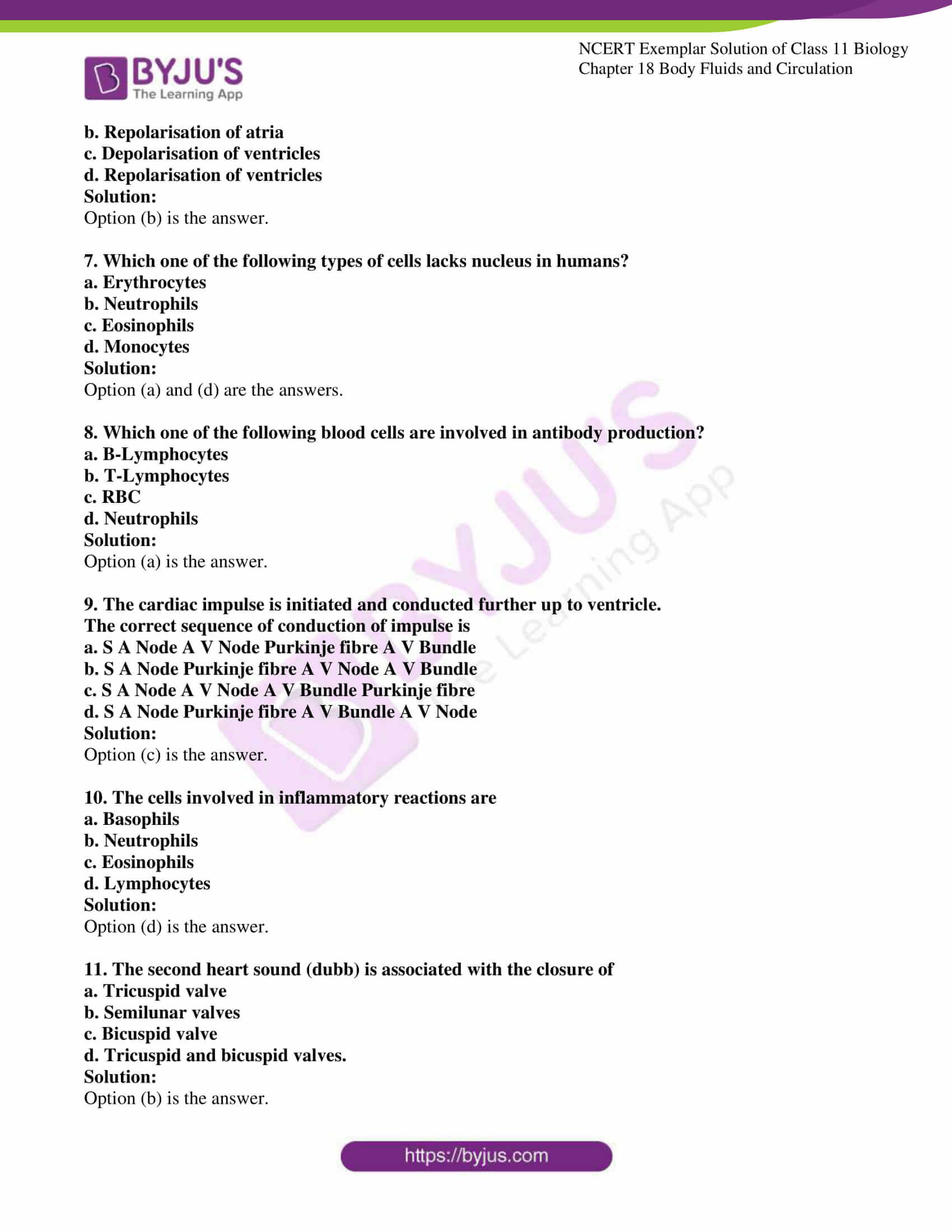 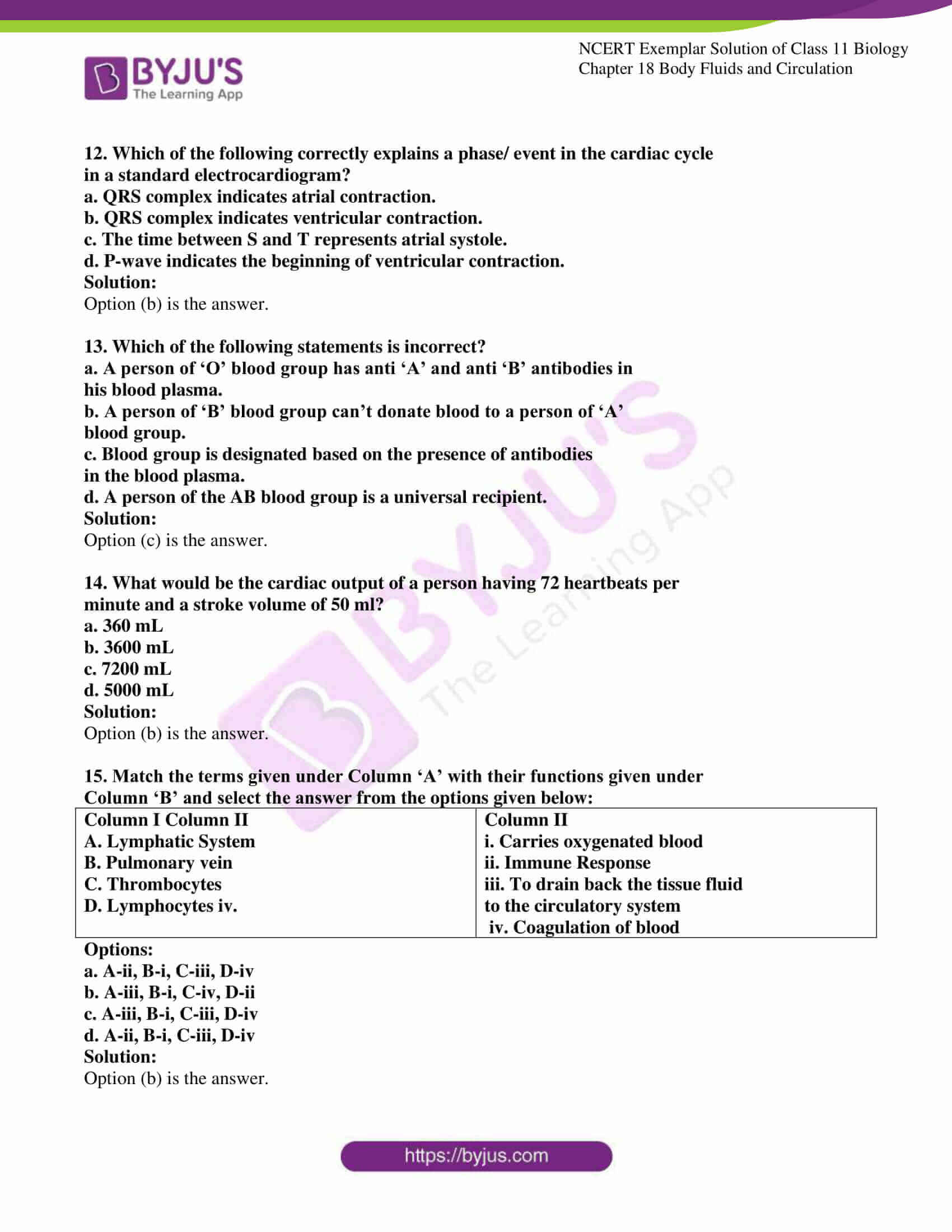 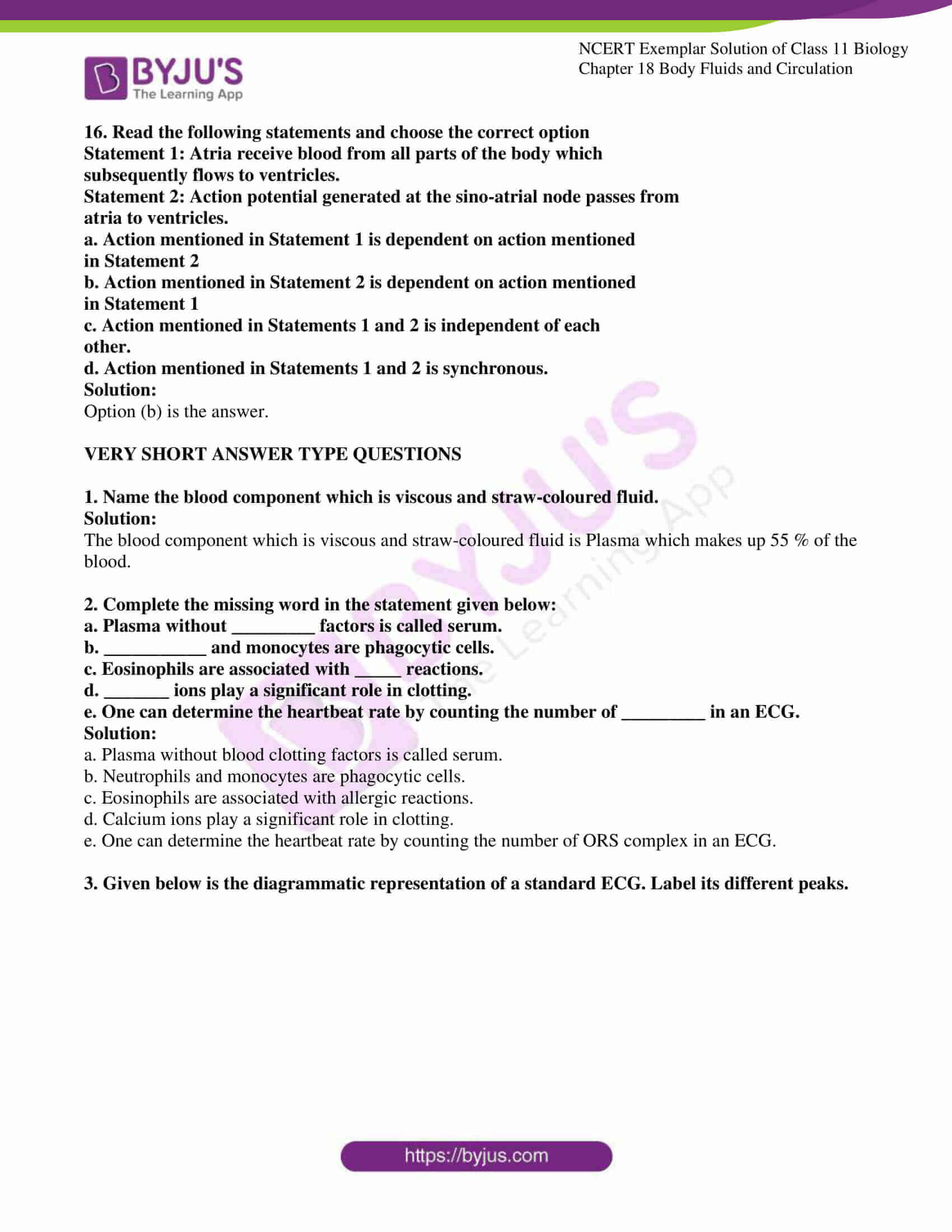 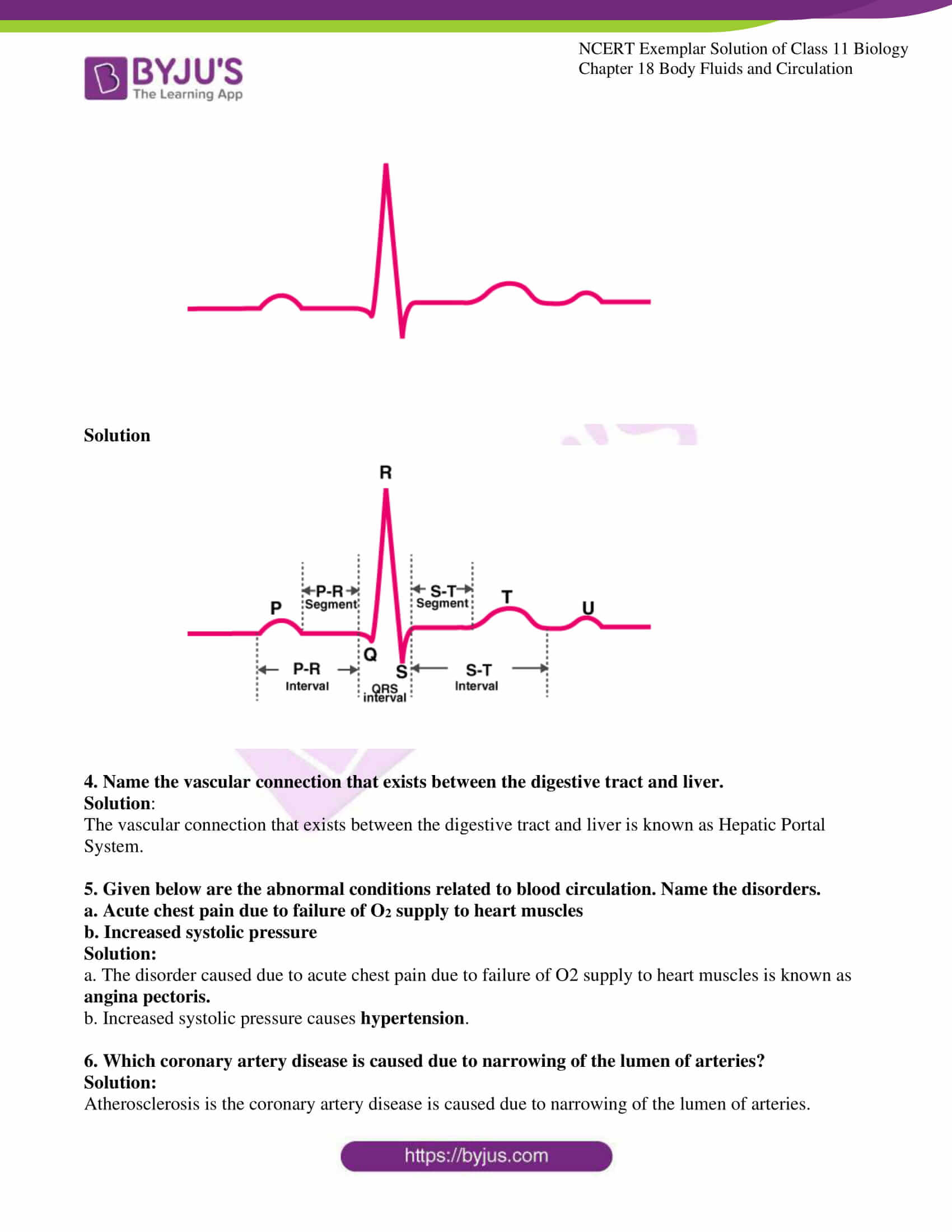 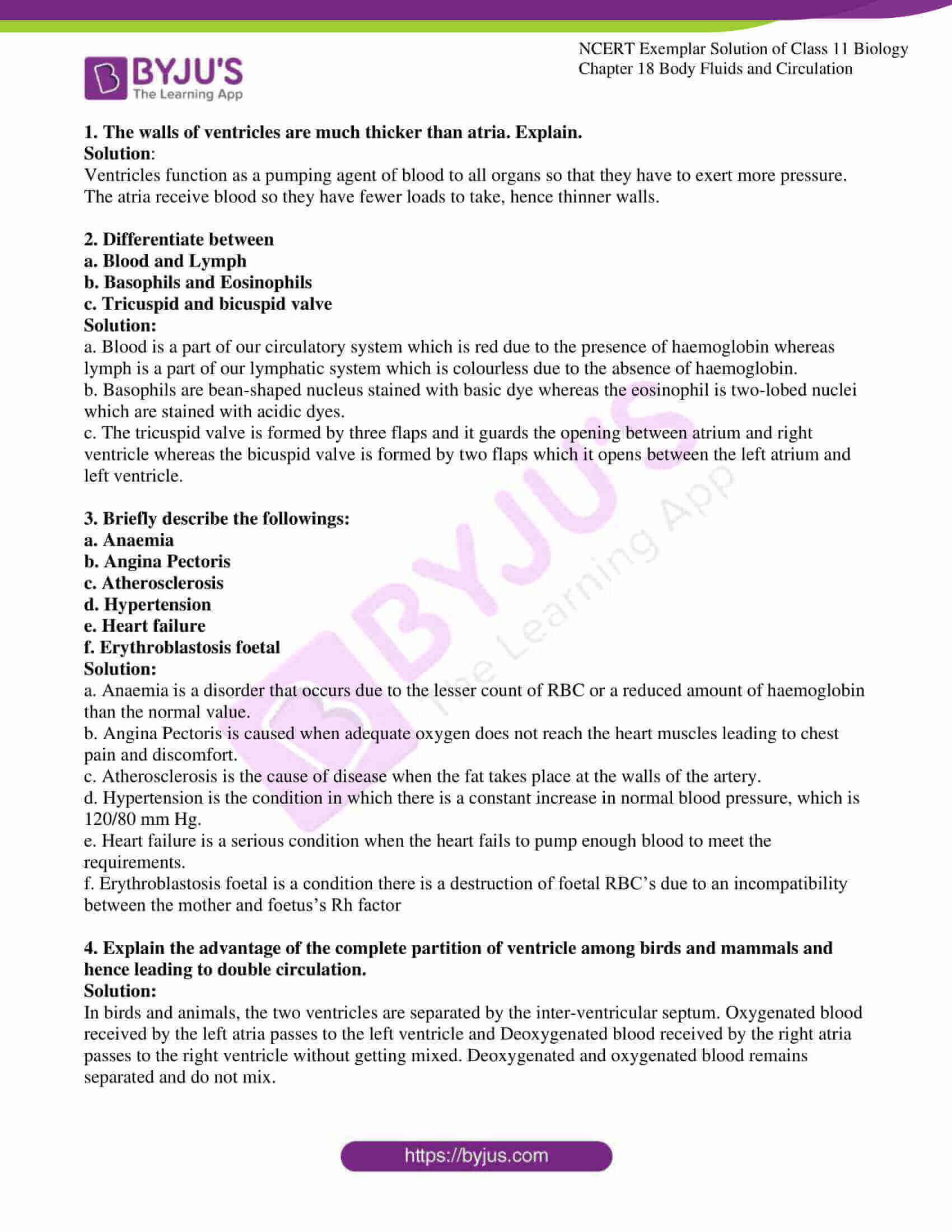 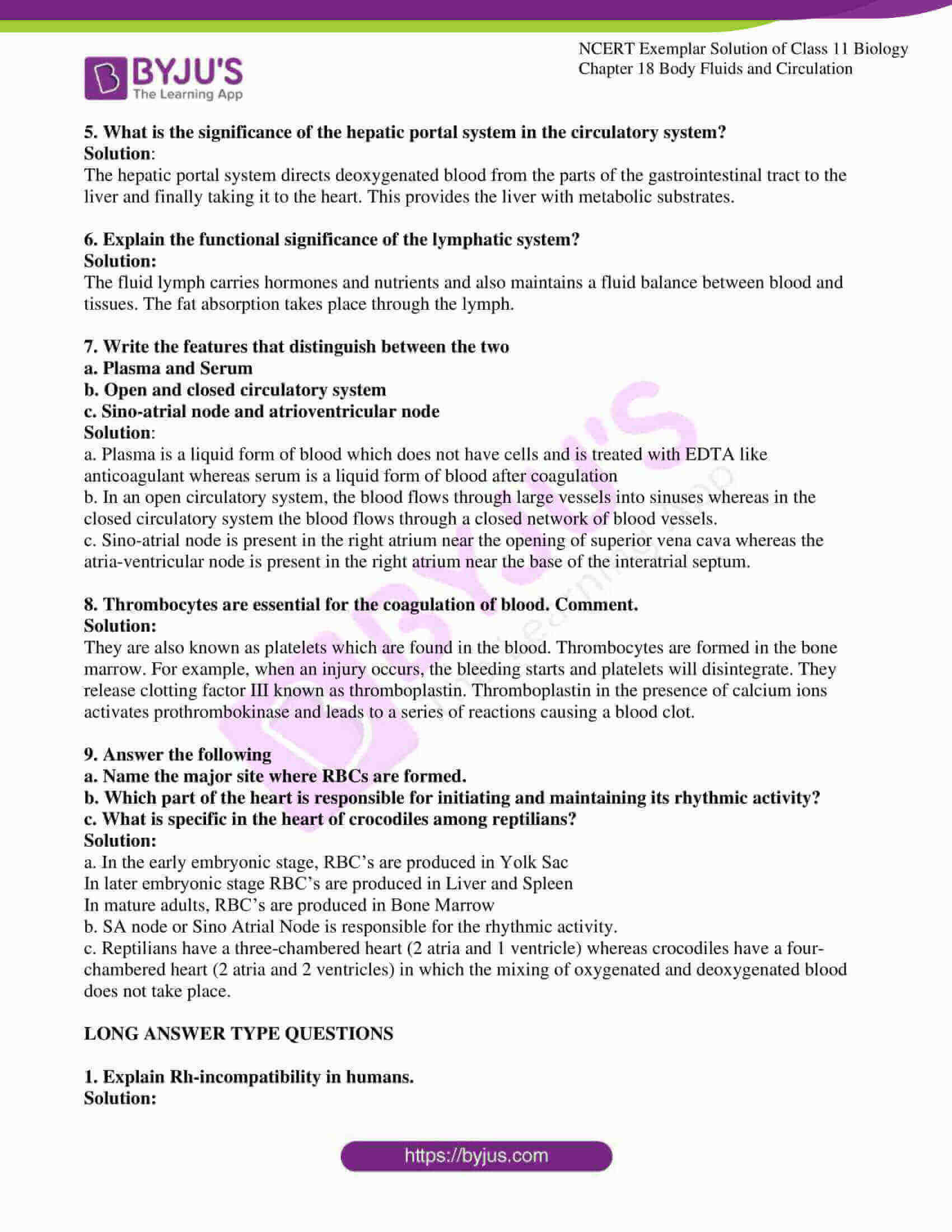 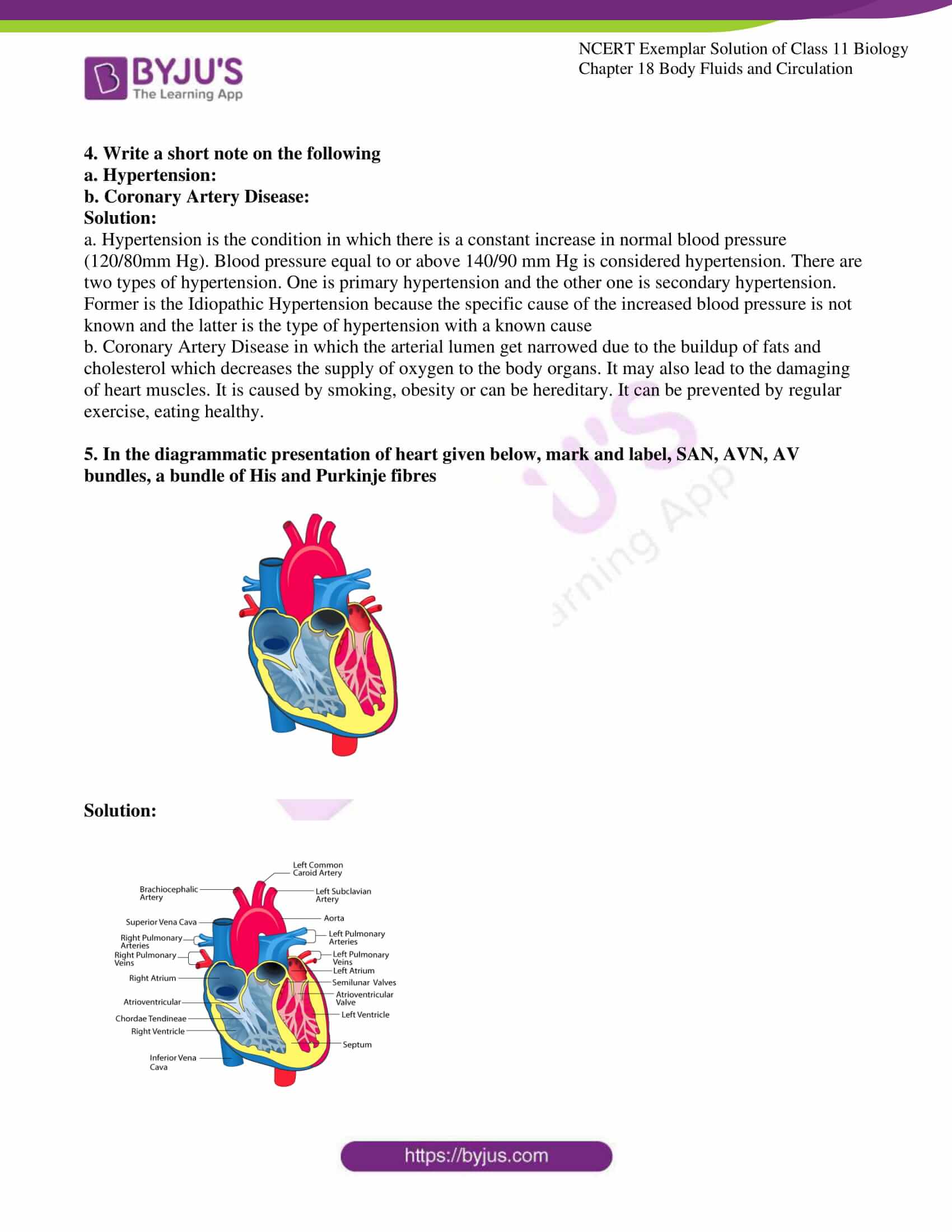 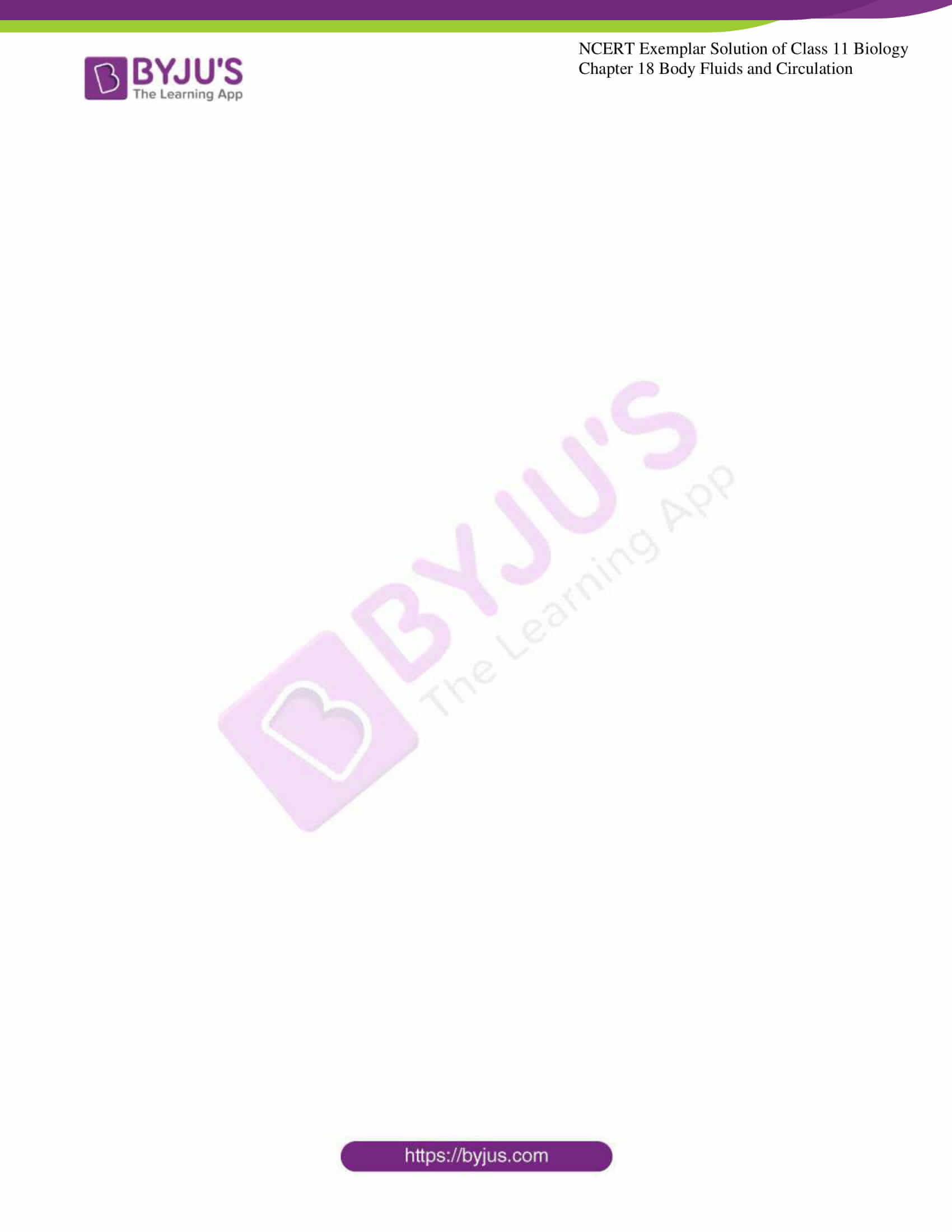 1. Which of the following cells does not exhibit phagocytosis activity?

2. One of the common symptoms observed in people infected with Dengue fever is

a. Significant decrease in RBC count

b. Significant decrease in WBC count

3. Which among the followings is correct during each cardiac cycle?

a. The volume of blood pumped out by the Rt and Lt ventricles is same.

b. The volume of blood pumped out by the Rt and Lt ventricles is different

c. The volume of blood received by each atrium is different

d. The volume of blood received by the aorta and pulmonary artery is different

4. The cardiac activity could be moderated by the autonomous neural system.

a. The parasympathetic system stimulates the heart rate and stroke volume

b. The sympathetic system stimulates the heart rate and stroke volume

5. Mark the pair of substances among the following which is essential for coagulation of blood.

a. Heparin and calcium ions

b. Calcium ions and platelet factors

6. ECG depicts the depolarisation and repolarisation processes during the cardiac cycle. In the ECG of a normal healthy individual one of the following waves is not represented.

a. Depolarisation of atria

b. Repolarisation of atria

7. Which one of the following types of cells lacks nucleus in humans?

8. Which one of the following blood cells are involved in antibody production?

9. The cardiac impulse is initiated and conducted further up to ventricle.

The correct sequence of conduction of impulse is

a. S A Node A V Node Purkinje fibre A V Bundle

b. S A Node Purkinje fibre A V Node A V Bundle

10. The cells involved in inflammatory reactions are

11. The second heart sound (dubb) is associated with the closure of

12. Which of the following correctly explains a phase/ event in the cardiac cycle

in a standard electrocardiogram?

c. The time between S and T represents atrial systole.

13. Which of the following statements is incorrect?

a. A person of ‘O’ blood group has anti ‘A’ and anti ‘B’ antibodies in

c. Blood group is designated based on the presence of antibodies

in the blood plasma.

d. A person of the AB blood group is a universal recipient.

14. What would be the cardiac output of a person having 72 heartbeats per

minute and a stroke volume of 50 ml?

Column ‘B’ and select the answer from the options given below:

16. Read the following statements and choose the correct option

Statement 1: Atria receive blood from all parts of the body which

Statement 2: Action potential generated at the sino-atrial node passes from

c. Action mentioned in Statements 1 and 2 is independent of each

d. Action mentioned in Statements 1 and 2 is synchronous.

1. Name the blood component which is viscous and straw-coloured fluid.Solution:

The blood component which is viscous and straw-coloured fluid is Plasma which makes up 55 % of the blood.

2. Complete the missing word in the statement given below:

c. Eosinophils are associated with _____ reactions.

a. Plasma without blood clotting factors is called serum.

b. Neutrophils and monocytes are phagocytic cells.

e. One can determine the heartbeat rate by counting the number of ORS complex in an ECG.

3. Given below is the diagrammatic representation of a standard ECG. Label its different peaks.

4. Name the vascular connection that exists between the digestive tract and liver.

The vascular connection that exists between the digestive tract and liver is known as Hepatic Portal System.

5. Given below are the abnormal conditions related to blood circulation. Name the disorders.

a. Acute chest pain due to failure of O2 supply to heart muscles

a. The disorder caused due to acute chest pain due to failure of O2 supply to heart muscles is known as angina pectoris.

6. Which coronary artery disease is caused due to narrowing of the lumen of arteries?

Atherosclerosis is the coronary artery disease is caused due to narrowing of the lumen of arteries.

b. Bundle of His

a. Purkinje fibre: It is present in the Myocardium of the ventricle and is formed by the branching of the right and left bundle. It carries impulses from S.A node

b. Bundle of His: These are fibres which originate from the AV node present in the wall of the right atrium.

8. State the functions of the following in blood

a. Fibrinogen is involved in the clotting of blood.

b. Globulin functions in the immune responses.

c. Neutrophils are phagocytic and these are the first cell which reaches the site and engulf the microbes when an infection occurs

d. Lymphocytes are involved in the immune response in the blood.

Erythroblastosis foetalis occurs due to Rh incompatibility between the mother and the foetus during pregnancy which may lead to the death of the foetus or severe Anaemia.

10. Explain the consequences of a situation in which blood does not coagulate.

If blood clotting does not take place excessive bleeding would take place which might lead to death.

11. What is the significance of the time gap in the passage of action potential from the sino-atrial node to the ventricle?

12. How will you interpret an electrocardiogram (ECG) in which time taken in the QRS complex is higher?

1. The walls of ventricles are much thicker than atria. Explain.

Ventricles function as a pumping agent of blood to all organs so that they have to exert more pressure. The atria receive blood so they have fewer loads to take, hence thinner walls.

a. Blood and Lymph

b. Basophils and Eosinophils

b. Basophils are bean-shaped nucleus stained with basic dye whereas the eosinophil is two-lobed nuclei which are stained with acidic dyes.

a. Anaemia is a disorder that occurs due to the lesser count of RBC or a reduced amount of haemoglobin than the normal value.

b. Angina Pectoris is caused when adequate oxygen does not reach the heart muscles leading to chest pain and discomfort.

c. Atherosclerosis is the cause of disease when the fat takes place at the walls of the artery.

d. Hypertension is the condition in which there is a constant increase in normal blood pressure, which is 120/80 mm Hg.

e. Heart failure is a serious condition when the heart fails to pump enough blood to meet the requirements.

f. Erythroblastosis foetal is a condition there is a destruction of foetal RBC’s due to an incompatibility between the mother and foetus’s Rh factor

4. Explain the advantage of the complete partition of ventricle among birds and mammals and hence leading to double circulation.

5. What is the significance of the hepatic portal system in the circulatory system?

The hepatic portal system directs deoxygenated blood from the parts of the gastrointestinal tract to the liver and finally taking it to the heart. This provides the liver with metabolic substrates.

6. Explain the functional significance of the lymphatic system?

The fluid lymph carries hormones and nutrients and also maintains a fluid balance between blood and tissues. The fat absorption takes place through the lymph.

7. Write the features that distinguish between the two

a. Plasma and Serum

b. Open and closed circulatory system

8. Thrombocytes are essential for the coagulation of blood. Comment.

They are also known as platelets which are found in the blood. Thrombocytes are formed in the bone marrow. For example, when an injury occurs, the bleeding starts and platelets will disintegrate. They release clotting factor III known as thromboplastin. Thromboplastin in the presence of calcium ions activates prothrombokinase and leads to a series of reactions causing a blood clot.

a. Name the major site where RBCs are formed.

b. Which part of the heart is responsible for initiating and maintaining its rhythmic activity?

c. What is specific in the heart of crocodiles among reptilians?

a. In the early embryonic stage, RBC’s are produced in Yolk Sac

In mature adults, RBC’s are produced in Bone Marrow

b. SA node or Sino Atrial Node is responsible for the rhythmic activity.

There are many blood groups which are known mainly. There is another type of blood group known as Rh factor or Rhesus monkey factor which is an inherited factor. People who do not have Rh factor are called Rh-negative people (Rh-ve). Rh-incompatibility in humans may lead to a disorder called as Erythroblastosis foetal at the time of pregnancy if the foetus is Rh+ve and the mother is Rh-ve and if the blood from foetus enters the mother’s bloodstream, antibodies against the foetus blood are created. This is not affected at the first pregnancy but in subsequent if the baby is RH+ve the antibodies formed against Rh+ve blood during first pregnancy may enter the foetus through the placenta. This leads to death due to the destruction of foetus RBC’s.

2. Describe the events in the cardiac cycle. Explain “double circulation”.

1. Atrial Systole (0.7 sec): In this event atria contracts due to the wave of contraction initiated by the SA node. The blood flow takes place in ventricles as the two valves are open.

2. Ventricle Systole (0.5 sec): After this, contraction of ventricles starts taking place due to the wave of contraction initiated by the AV node. Thus closing of the two valves occur and first heart sound is produced ‘club’.

3. Complete Ventricular Systole: After ventricular contraction, the blood flows into the pulmonary trunk and aorta as the semilunar valves are opened.

4. Ventricular Diastole: In this event, the ventricles relax and the semilunar valves close and the second heart sound is made ‘dub’

5. Complete Ventricular Diastole: The opening of bicuspid and tricuspid valves take place as the pressure of ventricles lowers down and blood flows from atria to the ventricles. 0.8seconds will take for the cycle to occur.

In double circulation, deoxygenated and oxygenated blood remains separated and do not mix.

3. Explain different types of blood groups and donor compatibility by making a table. 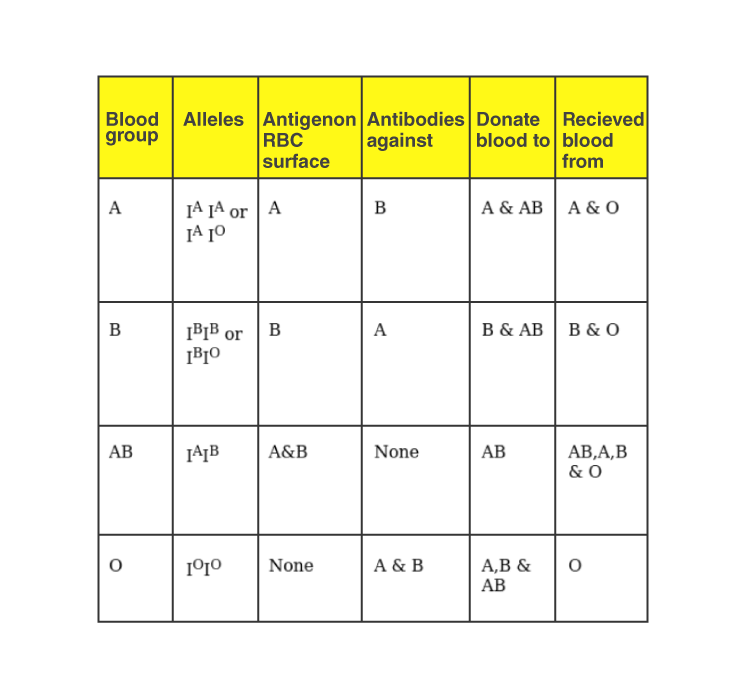 4. Write a short note on the following

b. Coronary Artery Disease in which the arterial lumen get narrowed due to the buildup of fats and cholesterol which decreases the supply of oxygen to the body organs. It may also lead to the damaging of heart muscles. It is caused by smoking, obesity or can be hereditary. It can be prevented by regular exercise, eating healthy.

5. In the diagrammatic presentation of heart given below, mark and label, SAN, AVN, AV bundles, a bundle of His and Purkinje fibres 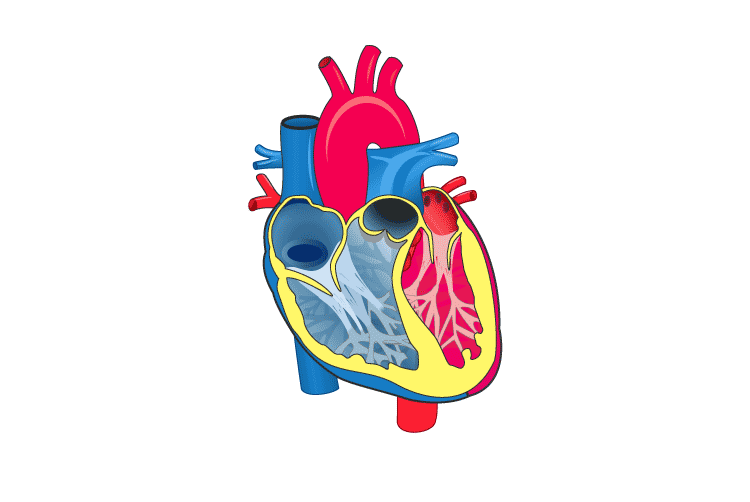 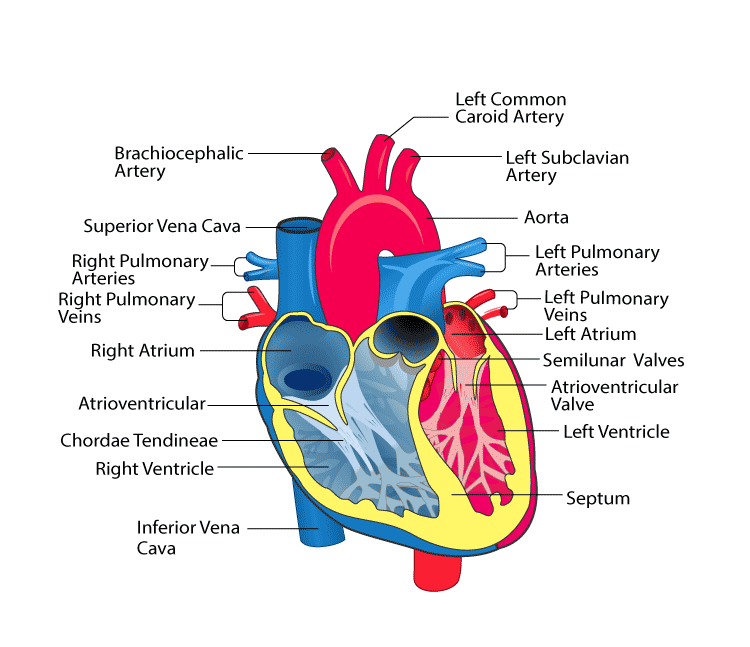 Body fluids and Circulation talks about the different fluids present in the body and how the circulation of these different fluids is important to distribute to various body parts. The system that is responsible for circulation is termed as the circulatory system, which is also known as the cardiovascular system. The heart is the major organ involved in pumping out blood throughout the body.

BYJU’S- the learning app, provides free NCERT Solutions, NCERT Exemplar solutions, notes, study material for Class 11 which help students in their exam preparations. These solutions are prepared by a team of our subject experts and framed under the guidelines of NCERT and updated CBSE syllabus (2020-2021). These materials include detailed solutions for all the questions in Class 11 Biology Chapter 18- Body Fluids and Circulation.