NCERT Exemplar for Class 11 Biology Chapter 10 Cell Cycle and Cell Division serve you with the necessary understanding of the concepts involved in this chapter. Students who are planning to take medical and other biology-related courses in the future need to understand the concepts of cell cycle and cell division clearly in order to avoid difficulty in the future. 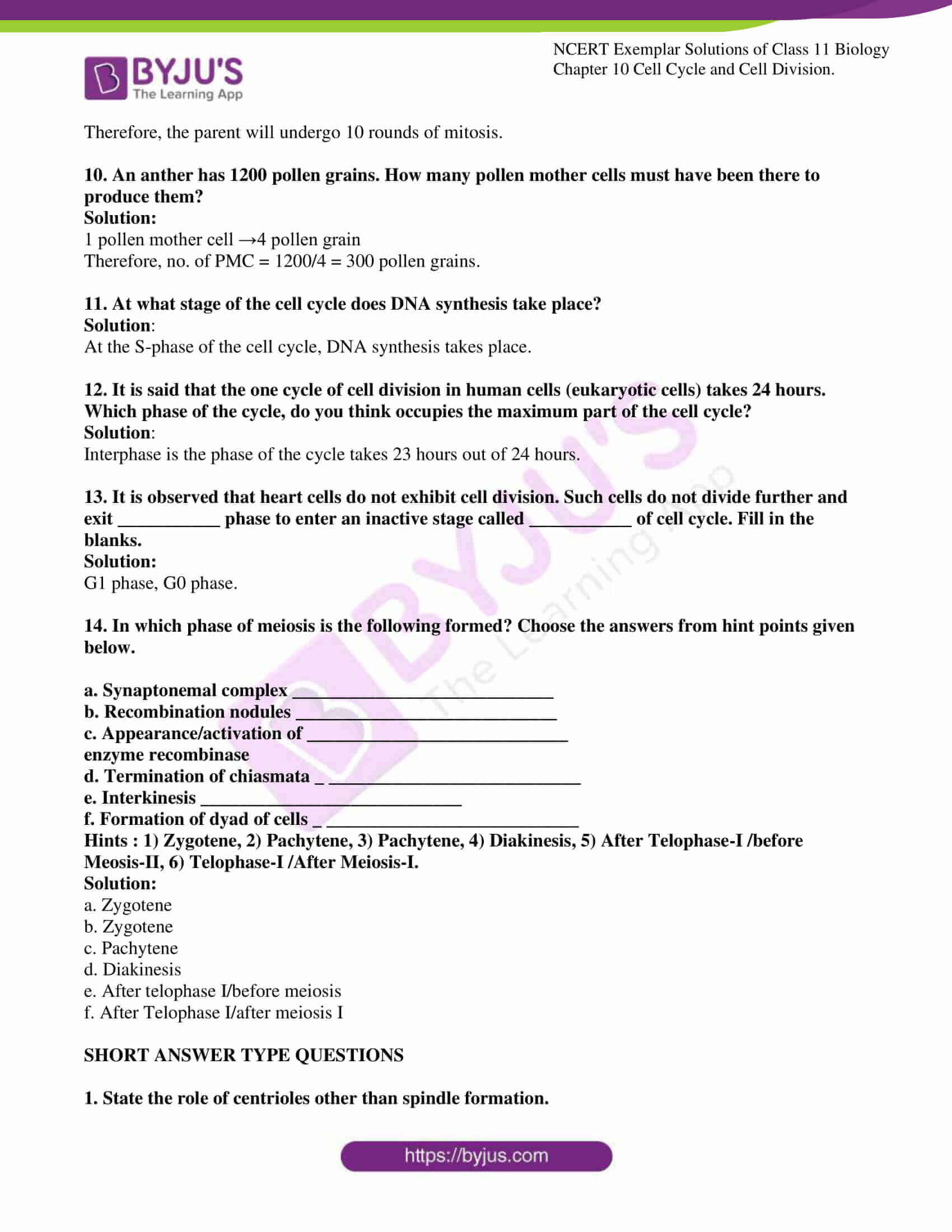 a. Production of gametes

b. Reduction in the number of chromosomes

d. all of the above

2. At which stage of meiosis does the genetic constitution of gametes is

3. Meiosis occurs in organisms during

c. Both sexual and vegetative reproduction

4. Mitosis is characterised by

c. Both reduction and equal division

6. A bivalent of meiosis-I consists of

a. Two chromatids and one centromere

b. Two chromatids and two centromere

7. Cells which are not dividing are likely to be at

8. Which of the events listed below is not observed during mitosis?

b. Movement of centrioles to opposite poles

c. The appearance of chromosomes with two chromatids joined together

9. Identify the wrong statement about meiosis

a. The pairing of homologous chromosomes

b. Four haploid cells are formed

c. At the end of meiosis, the number of chromosomes is reduced to

a. The cell is metabolically inactive

b. DNA in the cell does not replicate

c. It is not a phase of synthesis of macromolecules

1. Between a prokaryote and a eukaryote, which cell has a shorter cell

2. Which of the phases of the cell cycle is of longest duration?

To make the chromosomes visible the cell is stained with Acetocarmine and mounted in acetocarmine only.

4. Which tissue of animals and plants exhibits meiosis?

5. Given that the average duplication time of E.coli is 20 minutes, how much time will two E.coli cells take to become 32 cells?

6. Which part of the human body should one use to demonstrate stages in mitosis?

Tissues near to the cheeks can be taken to demonstrate stages in mitosis.

7. What attributes does a chromatid require to be classified as a chromosome?

When chromatids are attached to the centromere it is termed as a chromosome.

8. The diagram shows a bivalent at prophase-I of meiosis. Which of the four chromatids can cross over? 9. If the tissue has at a given time 1024 cells, how many cycles of mitosis had the original parental single-cell undergone?

Therefore, the parent will undergo 10 rounds of mitosis.

10. An anther has 1200 pollen grains. How many pollen mother cells must have been there to produce them?

11. At what stage of the cell cycle does DNA synthesis take place?

At the S-phase of the cell cycle, DNA synthesis takes place.

12. It is said that the one cycle of cell division in human cells (eukaryotic cells) takes 24 hours. Which phase of the cycle, do you think occupies the maximum part of the cell cycle?

Interphase is the phase of the cycle takes 23 hours out of 24 hours.

14. In which phase of meiosis is the following formed? Choose the answers from hint points given below.

f. After Telophase I/after meiosis I

1. State the role of centrioles other than spindle formation.

Centriole forms microtubule and forms the basal body of flagella.

2. Mitochondria and plastids have their DNA (genetic material). What is known about their fate during nuclear division like mitosis?

DNA present in mitochondria in plastids are called the extrachromosomal DNA.

They are independent of the nuclear division of nuclear DNA. Hence, no effect of mitosis is seen on extrachromosomal DNA.

3. Label the diagram and also determine the stage at which this structure is visible. 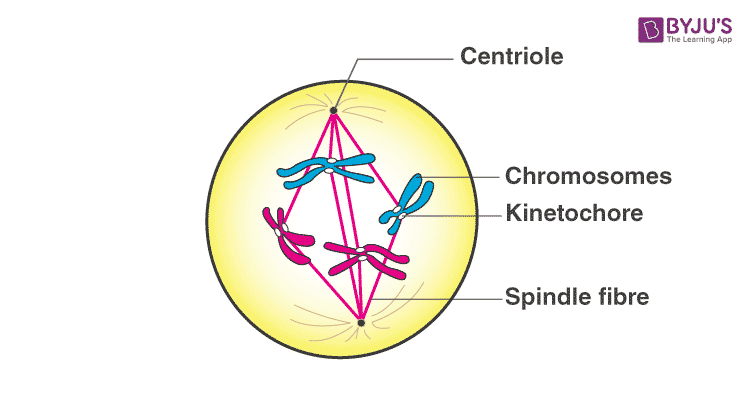 4. A cell has 32 chromosomes. It undergoes mitotic division. What will be the chromosome number (N) during metaphase? What would be the DNA content (C) during anaphase?

Both N and C will be 32. This is because DNA is replicated during the S phase, after that it would remain the same during equational division.

The phenomenon of the existence of two types of chromosome no. in a different cell of the body is called mosaicism. This may arise due to non-disjunction of chromosomes or lag of anaphase.

6. The following events occur during the various phases of the cell cycle, Name the phase against each of the events.

7. Mitosis results in producing two cells which are similar to each other. What would be the consequence if each of the following irregularities occur during mitosis?

a. Nuclear membrane fails to disintegrate

b. Duplication of DNA does not occur

c. Centromeres do not divide

d. Cytokinesis does not occur

a. Nuclear membrane fails to disintegrate, then the spindle fibre would not reach the chromosomes.

b. Duplication of DNA does not occur, then the whole cell cycle would get arrested and will enter an inactive stage called the G0 stag.

d. Cytokinesis does not occur- It will result in polyploidy.

8. Both unicellular and multicellular organisms undergo mitosis. What are the differences, if any, observed in the process between the two?

This is called malignancy caused due to cancer.

10. Two key events take place, during S phase in animal cells, DNA replication and duplication of the centriole. In which parts of the cell do events occur?

DNA replication occurs in the nucleus and centriole duplicates in the cytoplasm.

A diploid zygote is formed when the two haploid cells called gametes fused during fertilization. If meiosis is absent than two diploid gametes would be produced which will result in the formation of tetraploid zygote. To conserve the chromosome, number meiosis is very important.

12. Name a cell that is found arrested in diplotene stage for months and years. Comment in 2-3 lines how it completes the cell cycle?

13. How does cytokinesis in plant cells differ from that in animal cells?

1. Comment on the statement – Telophase is reverse of prophase.

In Prophase- Chromosome condenses. Nuclear membrane disintegrates. Organelles like mitochondria, endoplasmic reticulum, Golgi apparatus disappears. Cells at the end of prophase do not show Golgi complexes, endoplasmic reticulum and nucleolus. The chromosome clusters will be surrounded by the nuclear envelope at the telophase stage.

2. What are the various stages of meiotic prophase-I? Enumerate the chromosomal events during each stage?

• In some members of Liliaceae chromosomes remain attached to the nuclear membrane – bouquet stage.

• The enzyme recombinase, for crossing over comes from the recombination nodule of the synaptonemal complex.

• But homologous chromosomes are still held by an X like structure called the chiasma.

• Chiasmata develops at the point of crossing over.

• Terminalisation of chiasmata: Chiasmata starts opening in a zipper-like fashion towards the periphery

3. Differentiate between the events of mitosis and meiosis.

1. Prophase will be short duration

2. Only a single metaphasis plate is formed during metaphase.

3. Sister chromatids tend to move opposite pole during anaphase

1. Prophase I is a long duration and prophase II is a short duration

4. Write a brief note on the following

It is made up of protein formed between two homologous chromosomes. The complex formed during zygotene which is the substage of Prophase I. It contains a recombination nodule which consists of enzyme recombinase involved in crossing over.

5. Write briefly the significance of mitosis and meiosis in a multicellular organism.

Mitosis creates the cells necessary to add more mass to the body, as well as more cells to cope with the growth, such as new blood cells. In case of injury, mitosis is involved in the healing of the tissues. Meiosis also produces genetic variation by way of the process of recombination. It helps to conserve the no. of chromosomes in a species.

6. An organism has two pair of chromosomes (i.e., chromosome number = 4). Diagrammatically represent the chromosomal arrangement during different phases of meiosis-II. BYJU’S provide you with cell cycle and cell division Class 11 videos, animations, exercises, and worksheets that help you to understand and memorise the topic for a very long period of time. For NCERT solutions, exemplar, notes, books, study materials tips and tricks visit the BYJU’S website or download BYJU’S learning App.