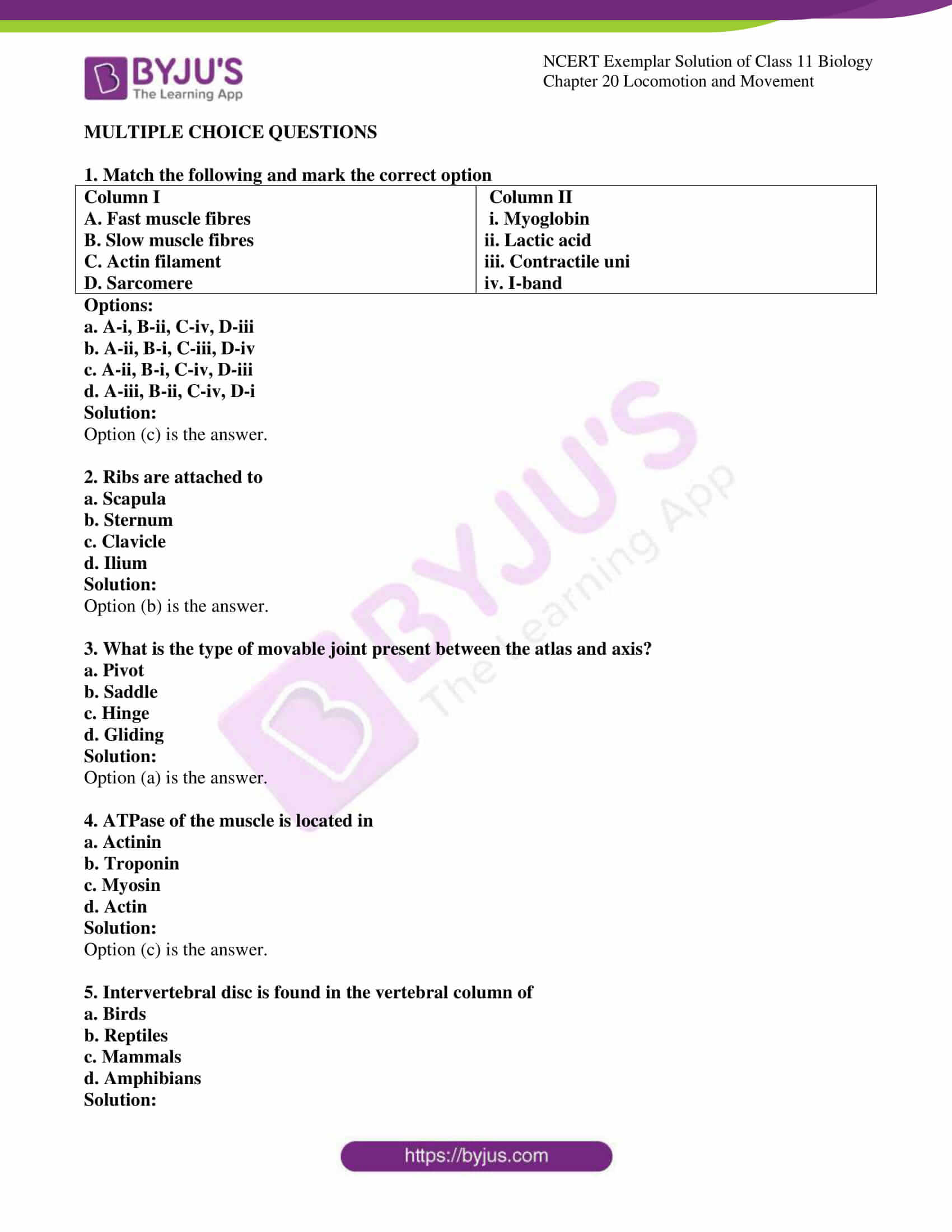 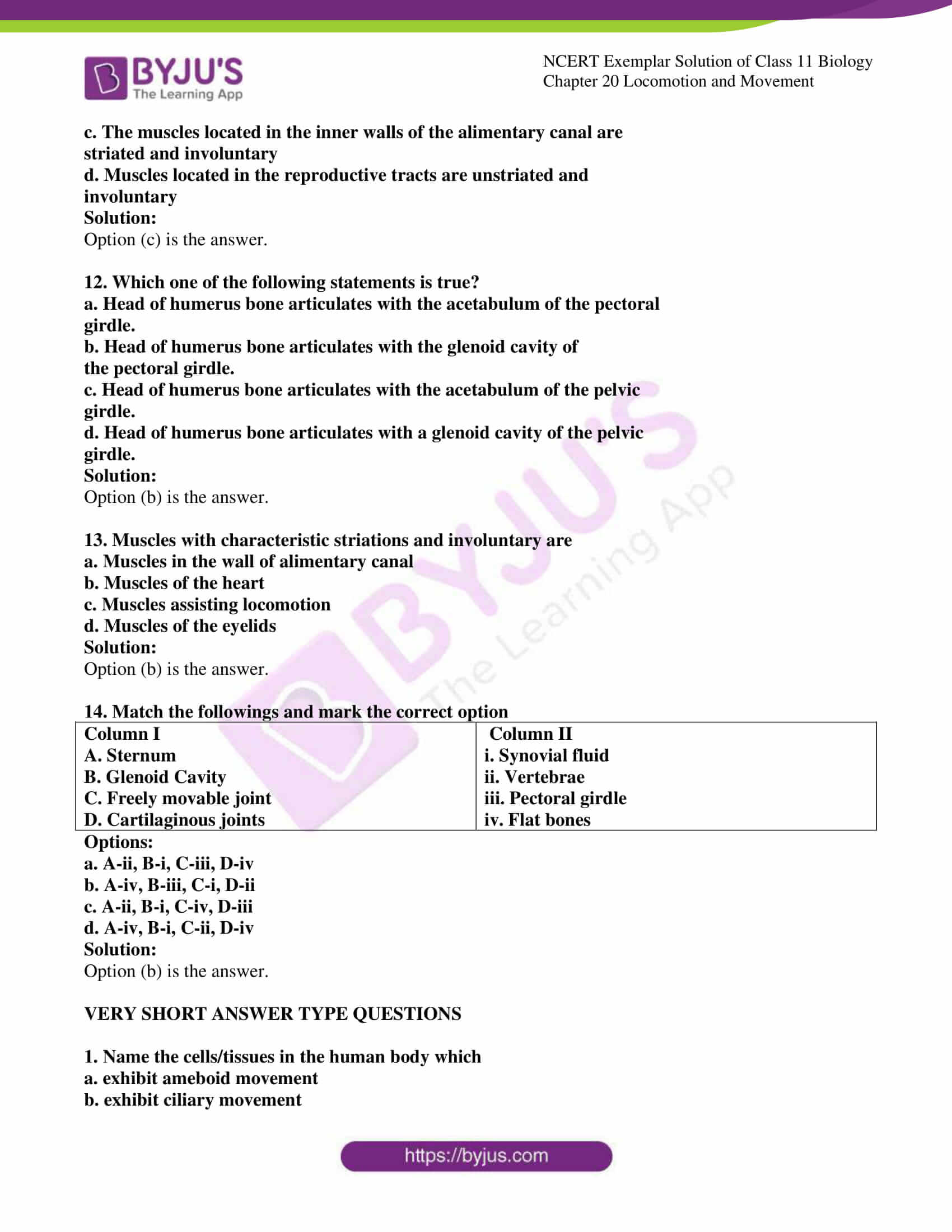 1. Match the following and mark the correct option

2. Ribs are attached to

3. What is the type of movable joint present between the atlas and axis?

4. ATPase of the muscle is located in

5. Intervertebral disc is found in the vertebral column of

6. Which one of the following is showing the correct sequential order of vertebrae in the vertebral column of human beings?

7. Which one of the following pairs is incorrect?

a. Hinge joint: between Humerus and Pectoral girdle

b. Pivot joint: between the atlas and axis

c. Gliding joint: between the carpals

d. Saddle joint: between carpals and metacarpals of thumb

8. Knee joint and elbow joint are examples of

b. Ball and socket joint

10. Which one of the following is not a disorder of bone?

11. Which one of the following statement is incorrect?

a. Heart muscles are striated and involuntary

b. The muscles of the hands and legs are striated and voluntary

c. The muscles located in the inner walls of the alimentary canal are

d. Muscles located in the reproductive tracts are unstriated and

12. Which one of the following statements is true?

a. Head of humerus bone articulates with the acetabulum of the pectoral

b. Head of humerus bone articulates with the glenoid cavity of

c. Head of humerus bone articulates with the acetabulum of the pelvic

d. Head of humerus bone articulates with a glenoid cavity of the pelvic

13. Muscles with characteristic striations and involuntary are

a. Muscles in the wall of alimentary canal

b. Muscles of the heart

d. Muscles of the eyelids

14. Match the followings and mark the correct option

1. Name the cells/tissues in the human body which

b. The cells/tissues in the human body which exhibits ciliary movement are the tissues present in the fallopian tube, trachea, and bronchioles.

3. Sarcolemma, sarcoplasm and sarcoplasmic reticulum refer to a particular type of cell in our body. Which is this cell and to what parts of that cell do these names refer to?

4. Label the different components of actin filament in the diagram given below

5. The three tiny bones present in the middle ear are called ear ossicles. Write them in correct sequence beginning from the eardrum.

The correct sequence of the three bones present in the middle ear is:

6. What is the difference between the matrix of bones and cartilage?

Matrix of bones is vascular and has lamellae. It has a protein called ossein whereas the matrix of cartilage is non-vascular and lamellae are absent.

7. Which tissue is afflicted by Myasthenia gravis? What is the underlying cause?

Myasthenia gravis is an autoimmune disease which affects the neuromuscular junction tissue. The underlying cause of Myasthenia gravis (MG) is that the immune system starts to attack its cells and which causes the transmission errors between the nerve impulse and skeletal muscles.

8. How do our bone joints function without grinding noise and pain?

Due to the presence of synovial fluid, which is filled in the synovial cavity, our bone joints function without pain and noise.

9. Give the location of a ball and socket joint in a human body

It is found between the humerus and Pectoral girdle (Shoulder Joint). Femur and Acetabulum of Pelvic girdle (Hip Joint).

There are four ball and socket joints present in the human body. Two shoulder joints and two hip joints.

10. Our forearm is made of three different bones. Comment.

Our forearms are made up of three different types of bones. Humerus, Radius, and Ulna. The humerus forms the joints at the shoulder and the elbow. Radius or radial bone extends from the other side of the elbow to the side of thumb of the wrist, and it runs parallel to the ulna. Thus ulna stretches from elbow to the young finger.

1. With respect to the rib cage, explain the following:

a. Bicephalic ribs are called bicephalic because each of the two ribs has articulating surfaces on the dorsal end

b. True ribs: The first seven ribs known as true ribs. Ventrally they are connected to the sternum with the help of hyaline cartilage.

c. Floating ribs: These ribs are not connected to the sternum, and they are the last two ribs (11th and 12th ribs) of the rib cage

2. In old age, people often suffer from stiff and inflamed joints. What is this condition called? What are the possible reasons for these symptoms?

In old age, people often suffer from stiff and inflamed joints due to an autoimmune disease known as rheumatoid arthritis. Reasons are:

1. The inflammation in the synovial joints due to the immune system attacking its synovial cells.

2. Smoking, genetic factors, and vitamin D deficiency can be the reason for the trigger behind the immune system.

3. Exchange of calcium between bone and extracellular fluid takes place under the influence of certain hormones

a. What will happen if more of Ca+ is in extracellular fluid?

b. What will happen if very less amount of Ca+ is in the extracellular fluid?

a. If more of Ca+ is in the extracellular fluid, then it will get accumulated into the bones under the influence of the hormone Thyrocalcitonin (TCT)

b. If very less amount of Ca+ is in the extracellular fluid thin bone resorption would occur due to the Parathyroid hormone.

4. Name at least two hormones which result in fluctuation of Ca+ level.

Thyrocalcitonin (TCT) which lowers the calcium and potassium levels in the blood and Parathyroid hormone which increased level of this cause the bones to release their Ca+ into the blood.

5. Rahul exercises regularly by visiting a gymnasium. Of late he is gaining weight. What could be the reason? Choose the correct answer and elaborate.

a. Rahul has gained weight due to the accumulation of fats in the body.

b. Rahul has gained weight due to increased muscle and less fat.

c. Rahul has gained weight because his muscle shape has improved.

d. Rahul has gained weight because he is accumulating water in the body.

b. Rahul has gained weight due to increased muscle and less fat because exercising regularly can cause an increase in the amount of sarcoplasm that is the thickness of myofibrils increases along with an increase in protein synthesis and mitochondria

6. Radha was running on a treadmill at a great speed for 15 minutes continuously. She stopped the treadmill and abruptly came out. For the next few minutes, she was breathing heavily/fast. Answer the following questions.

a. What happened to her muscles when she did strenuously exercise?

b. How did her breathing rate change?

a. Her muscles got fatigued as the accumulation of lactic acid in the muscles occurred due to the lack of oxygen during the exercise.

7. Write a few lines about Gout.

Gout is a form of arthritis which is caused by the accumulation of sodium urate crystal in the joints. Symptoms of gout are intensely painful joints, redness, and swollen joints.

8. What is the source of energy for muscle contraction?

9. What are the points for the articulation of Pelvic and Pectoral girdles?

The pectoral girdle has two bones called the clavicle and scapula which is articulated by a cavity called glenoid cavity with the head of the humerus by forming a ball and socket joint.

The pelvic girdle has three bones Ilium, Ischium, and Pubis which is articulated by a cavity called the acetabulum with the femur by forming a ball and socket joint.

1. Calcium ion concentration in the blood affects muscle contraction. Does it lead to tetany in certain cases? How will you correlate fluctuation in blood calcium with tetany?

2. An elderly woman slipped in the bathroom and had severe pain in her lower back. After X-ray examination doctors told her it is due to a slipped disc. What does that mean? How does it affect our health?

A slipped disc is a condition in which the intervertebral disc is displaced from its original position. It affects by causing muscle weakness. It can cause numbness of the body and pain in the muscles of arms and legs and lower back. It feels difficulty in walking and standing for a while. It would cause burning and tingling sense along with severe pain. It can also cause permanent nerve damage and paralysis if it remains untreated.

The sliding filament theory states that contraction of a muscle fibre occurs through the sliding of the thin filaments over the thick filaments. The thin filament is known as actin, and the thick filament is known as myosin. Alternative light and dark bands will be present in the muscle fibre which has contractile protein filaments called actin and myosin. A Z line elastic fibre is present in the fibre which bisects each of the I bands. The above diagram shows the contraction of a muscle fibre according to the sliding filament theory by the sliding of the thin filaments over the thick filaments.

4. How does a muscle shorten during its contraction and return to its original form during relaxation?

The steps followed during relaxation are

1. At the instant when the neural signal reaches the neuromuscular junction and acetylcholine the neurotransmitter acetylcholine is released which creates an action potential in the sarcolemma.

2. Due to this action potential, calcium ions are released which spread through muscle fibres.

3. Calcium ion bind to the subunit of troponin on the actin filament due to the increase in the concentration of the calcium ions which further remove the active sites in the myosin.

4. The myosin binds with the actin and forms a cross bridge.

5. This causes the attached actin filaments to move towards the centre of A-band. The Z-line also moves inwards, and a contraction of the sarcomere occurs in the muscles. During the muscle contraction, the I-band gets reduced while the A-band retains its original length.

7. The process remains continues as the concentration of calcium ion causes the formation of the action potential.

5. Discuss the role of Ca2+ ions in muscle contraction. Draw neat sketches to illustrate your answer.

1. Stored calcium ions are released by the sarcoplasmic reticulum which binds into the specific sites of the troponin component of the thin filament.

2. The confirmation of the troponin molecule change due to the binding and F-actin molecule become exposed.

3. The active sites of F-actin are specific to myosin head which have ATPase activity dependent on Mg2+

4. Ca2+ is pumped back to the sarcoplasmic reticulum during the relaxation of the muscles and causes the active site of myosin masking and the muscles get relaxed 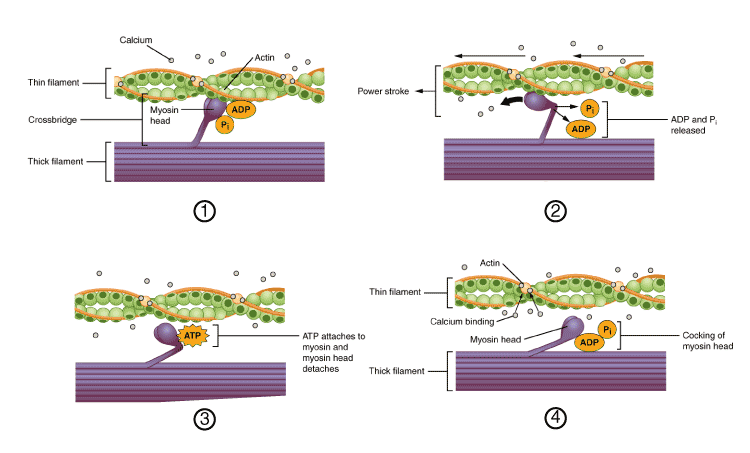 6. Differentiate between Pectoral and Pelvic girdle.