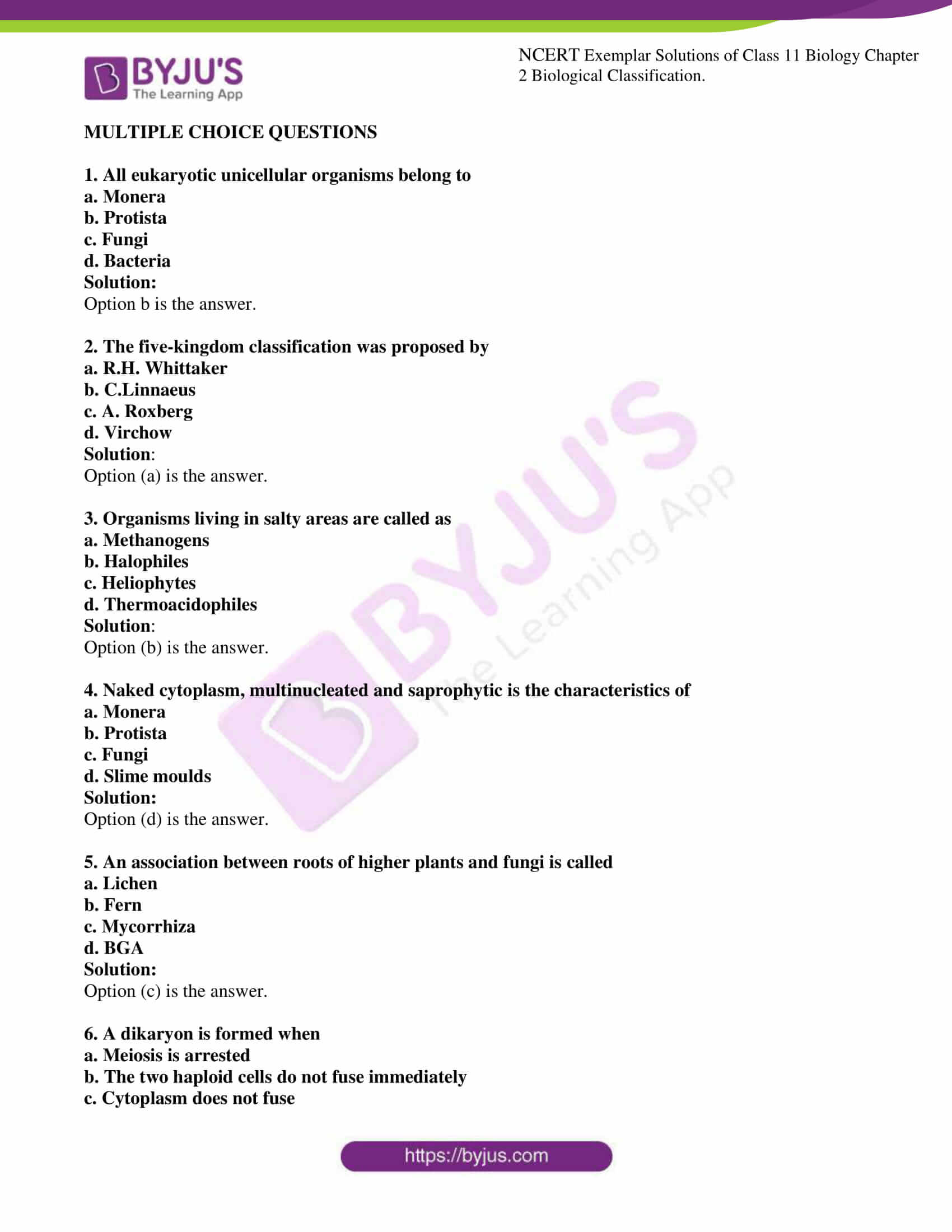 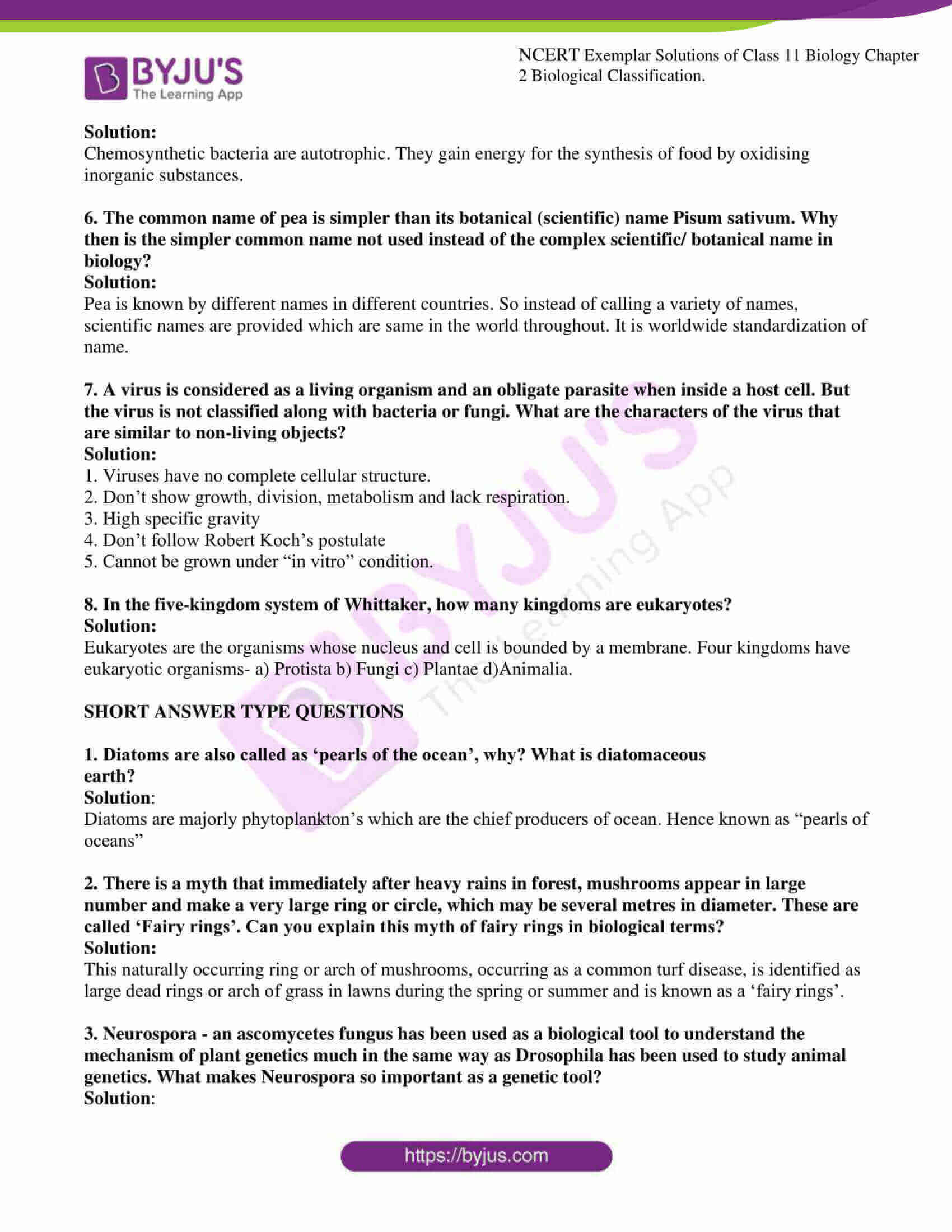 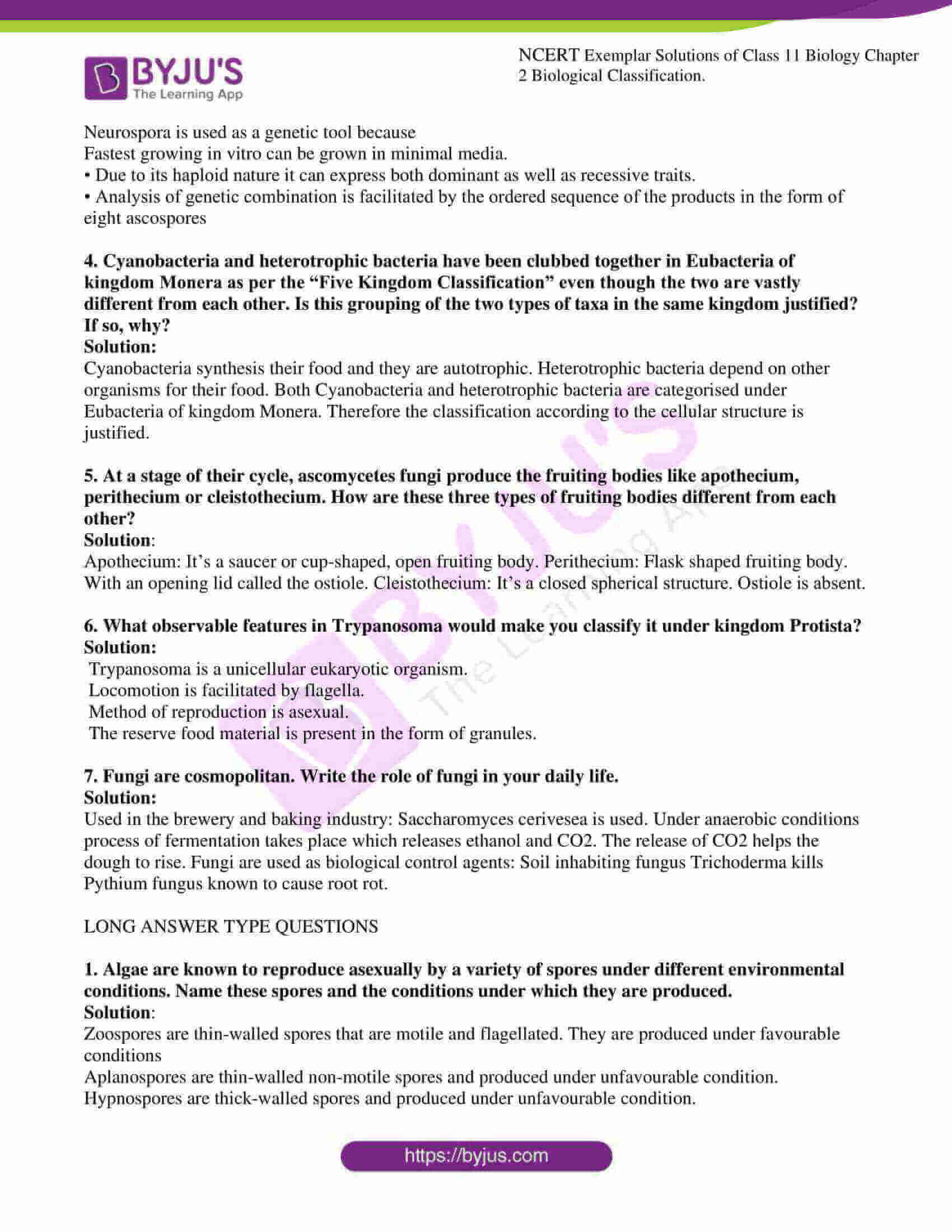 1. All eukaryotic unicellular organisms belong to

Option b is the answer.

2. The five-kingdom classification was proposed by

3. Organisms living in salty areas are called as

4. Naked cytoplasm, multinucleated and saprophytic is the characteristics of

5. An association between roots of higher plants and fungi is called

6. A dikaryon is formed when

a. Meiosis is arrested

b. The two haploid cells do not fuse immediately

c. Cytoplasm does not fuse

7. Contagium vivum fluidum was proposed by

9. Difference between Virus and Viroid is

a. Absence of protein coat in viroid but present in virus

b. Presence of low molecular weight RNA in the virus but absent in viroid

10. With respect to fungal sexual cycle, choose the correct sequence of

11. Viruses are non-cellular organisms but replicate themselves once they infect

the host cell. To which of the following kingdom do viruses belong to?

12. Members of Phycomycetes are found in

iv. As obligate parasites on plants

Choose from the following options

a. None of the above

1. What is the principle underlying the use of cyanobacteria in agricultural fields for crop improvement?

Cyanobacteria are capable of fixing nitrogen with the help of specialised cells called the heterocyst. They enrich the soil fertility. Hence BGA’s are used in agricultural fields. E.g. Colonies of Nostoc and Anabaena grow in Paddy field.

2. Suppose you accidentally find an old preserved permanent slide without a label. In your effort to identify it, you place the slide under the microscope and observe the following features:-

c. Biflagellate–one flagellum lying longitudinally and the other transversely.

What would you identify it as? Can you name the kingdom it belongs to?

According to the listed features, the organism must be a dinoflagellate. All the eukaryotic unicellular organism belonging to the kingdom Protista.

Two kingdom classifications did not distinguish between the prokaryotes and eukaryotes

They did not distinguish between unicellular and multicellular organisms

4. Polluted water bodies have usually a very high abundance of plants like Nostoc and Oscillitoria. Give reasons.

Polluted water bodies are rich in nutrients especially in nitrogen content which provides favourable condition to algae like Nostoc and Oscillotoria to bloom in the water bodies.

5. Are chemosynthetic bacteria-autotrophic or heterotrophic?

Chemosynthetic bacteria are autotrophic. They gain energy for the synthesis of food by oxidising inorganic substances.

6. The common name of pea is simpler than its botanical (scientific) name Pisum sativum. Why then is the simpler common name not used instead of the complex scientific/ botanical name in biology?

Pea is known by different names in different countries. So instead of calling a variety of names, scientific names are provided which are same in the world throughout. It is worldwide standardization of name.

7. A virus is considered as a living organism and an obligate parasite when inside a host cell. But the virus is not classified along with bacteria or fungi. What are the characters of the virus that are similar to non-living objects?

1. Viruses have no complete cellular structure.

5. Cannot be grown under “in vitro” condition.

8. In the five-kingdom system of Whittaker, how many kingdoms are eukaryotes?

Eukaryotes are the organisms whose nucleus and cell is bounded by a membrane. Four kingdoms have eukaryotic organisms- a) Protista b) Fungi c) Plantae d)Animalia.

1. Diatoms are also called as ‘pearls of the ocean’, why? What is diatomaceous

Diatoms are majorly phytoplankton’s which are the chief producers of ocean. Hence known as “pearls of oceans”

2. There is a myth that immediately after heavy rains in forest, mushrooms appear in large number and make a very large ring or circle, which may be several metres in diameter. These are called ‘Fairy rings’. Can you explain this myth of fairy rings in biological terms?

This naturally occurring ring or arch of mushrooms, occurring as a common turf disease, is identified as large dead rings or arch of grass in lawns during the spring or summer and is known as a ‘fairy rings’.

3. Neurospora – an ascomycetes fungus has been used as a biological tool to understand the mechanism of plant genetics much in the same way as Drosophila has been used to study animal genetics. What makes Neurospora so important as a genetic tool?

Neurospora is used as a genetic tool because

Fastest growing in vitro can be grown in minimal media.

• Due to its haploid nature it can express both dominant as well as recessive traits.

4. Cyanobacteria and heterotrophic bacteria have been clubbed together in Eubacteria of kingdom Monera as per the “Five Kingdom Classification” even though the two are vastly different from each other. Is this grouping of the two types of taxa in the same kingdom justified? If so, why?

5. At a stage of their cycle, ascomycetes fungi produce the fruiting bodies like apothecium, perithecium or cleistothecium. How are these three types of fruiting bodies different from each other?

6. What observable features in Trypanosoma would make you classify it under kingdom Protista?

Trypanosoma is a unicellular eukaryotic organism.

Locomotion is facilitated by flagella.

Method of reproduction is asexual.

The reserve food material is present in the form of granules.

7. Fungi are cosmopolitan. Write the role of fungi in your daily life.

Used in the brewery and baking industry: Saccharomyces cerivesea is used. Under anaerobic conditions process of fermentation takes place which releases ethanol and CO2. The release of CO2 helps the dough to rise. Fungi are used as biological control agents: Soil inhabiting fungus Trichoderma kills Pythium fungus known to cause root rot.

1. Algae are known to reproduce asexually by a variety of spores under different environmental conditions. Name these spores and the conditions under which they are produced.

Zoospores are thin-walled spores that are motile and flagellated. They are produced under favourable conditions

Aplanospores are thin-walled non-motile spores and produced under unfavourable condition.

Hypnospores are thick-walled spores and produced under unfavourable condition.

Akinites are from the vegetative cells, thick cell wall. It is formed under unfavourable condition.

Hormogonia are the fragments of filaments formed due to breakage of thallus due to the formation of mucilaginous filled necridia. It is formed under unfavourable condition.

2. Apart from chlorophyll, algae have several other pigments in their chloroplast. What pigments are found in blue-green, red and brown algae that are responsible for their characteristic colours?

Brown algae possess chlorophyll a, c, carotenoids and xanthophylls. They are olive green in colour.

Red algae possess chlorophyll a, d and phycoerythrin in their body

3. Make a list of algae and fungi that have commercial value as a source of food, chemicals, medicines and fodder.

Algae is used as food in many species like Porphyra, laminaria etc. Chlorella and spirulina are unicellular algae rich in protein

Some kind of marine algae produce a large number of hydrocolloids and used commercially. Example like agar obtained from delirium and gracilaria are used to grow microbes in ice-creams.

Yeast is used in the [production of alcohol and also for fermenting malted cereals juices to produce ethanol.

Cyclosporin A is an immunosuppressive agent in organ transplant patients.

Statins are produced by Monascus purpureus and used as a blood-cholesterol reducing agent.

4. ‘Peat’ is an important source of domestic fuel in several countries. How is ‘peat’ formed in nature?

Peat is formed from the wetland vegetation especially from the Sphagnum (bog moss).

Sphagnum likes to grow in acidic nature in the bog, due to the acidity the complete degradation of the cell could not take place due to the presence of less number of bacteria. Sphagnum uptakes water from the dead hyaline pores and holds a great amount of water. Due to the fossilization of Sphagnum, Peat is formed.

5. Biological classification is a dynamic and ever-evolving phenomenon which keeps changing with our understanding of life forms. Justify the statement taking any two examples.

C. Linnaeus classified the organisms based on morphological characters like Plantae and Animalia.

But it was not sufficient as there were certain organisms claimed by both botanist and zoologist. Later R.H. Whittaker proposed five kingdom classification system. Euglena and slime moulds were given place under kingdom Protista. Blue-green algae and bacteria were been placed under Monera. In 1977 Carl Woese proposed six kingdom classification. In this classification, the Kingdom Monera was split into two more domains i.e. Eubacteria and Archebacteria this was done based on some major differences in the cell wall. Many more organisms like virus, viroids and prions are there without being classified under any kingdom. Hence it can be said that the biological classification is an ever-evolving phenomenon.

To get well versed with this important chapter, students are advised to study this NCERT exemplar solution together with previous year question papers, sample papers and NCERT solutions.