NCERT Exemplar for Class 11 Biology Chapter 8 Cell structure and functions provide detailed explanations for the questions provided in the NCERT exemplar book. Studying this exemplar in detail will make you tuned in with the important topics of the chapter. 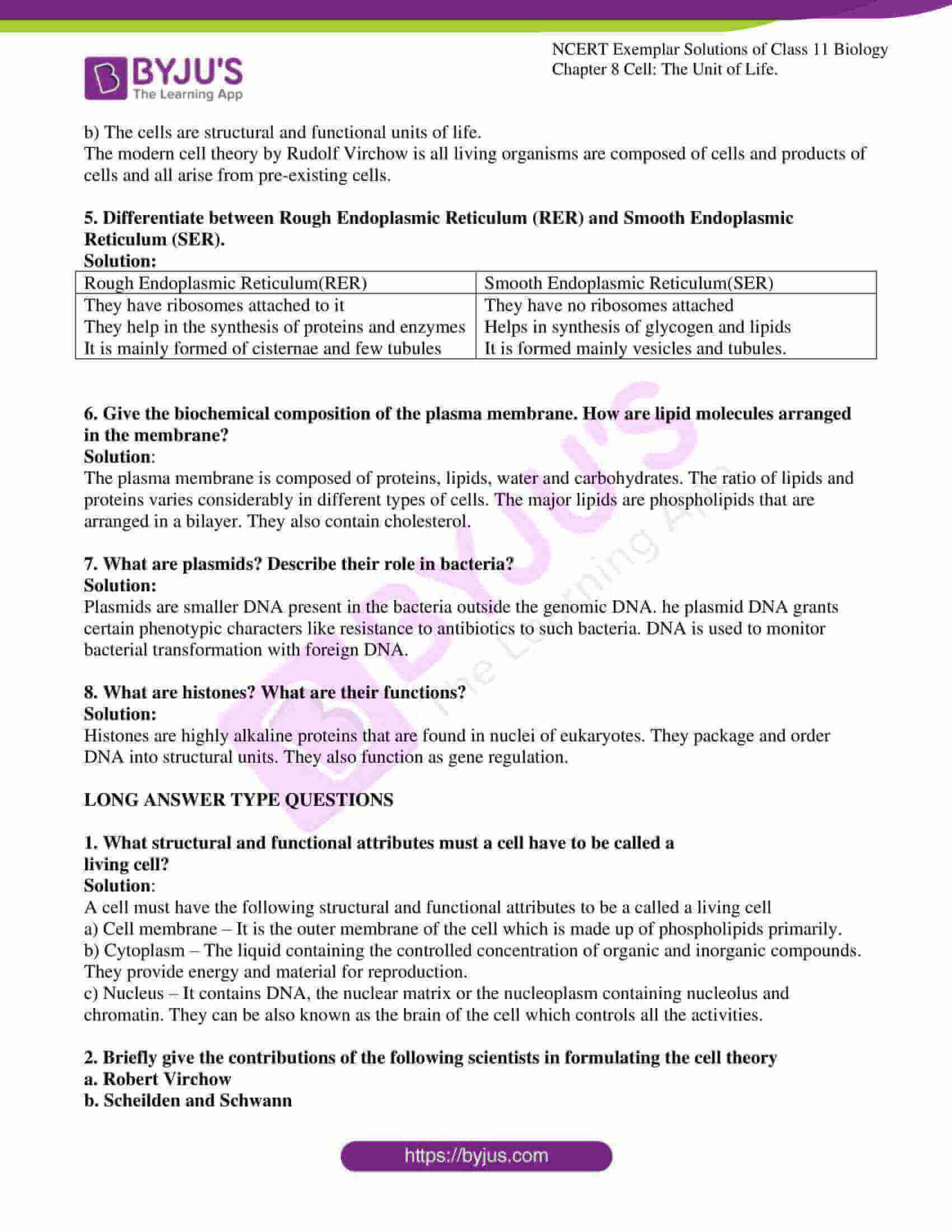 1. A common characteristic feature of plant sieve tube cells and most of

the mammalian erythrocytes is

a. Absence of mitochondria

b. Presence of cell wall

2. Select one which is not true for ribosome

a. Made of two sub-units

c. May attach to m+RNA

d. Have no role in protein synthesis

3. Which one of these is not a eukaryote?

4. Which of the following stains is not used for staining chromosomes?

5. Different cells have different sizes. Arrange the following cells in an

ascending order of their size. Choose the correct option among the

6. Which of the following features is common to prokaryotes and many

7. Who proposed the fluid mosaic model of the plasma membrane?

b. Schleiden and Schwann

8. Which of the following statements is true for a secretory cell?

a. Golgi apparatus is absent

b. Rough Endoplasmic Reticulum (RER) is easily observed in the

d. Secretory granules are formed in the nucleus.

a. The outer membrane of mitochondria

b. The inner membrane of chloroplast

c. Membrane boundary of the vacuole of plant cells

d. The cell membrane of a plant cell

10. Which of the following is not true of a eukaryotic cell?

a. The cell wall is made up of peptidoglycans

b. 80S type of ribosomes is present in the cytoplasm

11. Which of the following statements is not true for plasma membrane?

a. It is present in both plant and animal cell

b. Lipid is present as a bilayer in it

c. Proteins are presently integrated as well as loosely associated with

d. Carbohydrate is never found in it

12. Plastid differs from mitochondria based on one of the following

a. Presence of two layers of membrane

b. Presence of ribosome

Option (c) is the answer

13. Which of the following is not a function of cytoskeleton in a cell?

b. Maintenance of cell shape and structure

c. Support of the organelle

Option (a) is the answer

14. The stain used to visualise mitochondria is

Option (d) is the answer

1. What is the significance of vacuole in a plant cell?

A vacuole is a membrane-bound space found in the cytoplasm. It is found in both plant and animal cells but it is much larger in plants (occupies 90% of the space in plant cells). Help is in the storage, waste disposal, cell elongation and cell protection.

The ‘S’ refers to Svedberg’s unit or sedimentation coefficient. It is indirectly a measure of density and size.

3. Mention a single membrane-bound organelle which is rich in hydrolytic enzymes.

Lysosomes are the single membrane-bound organelle which is rich in hydrolytic enzymes.

4. What are gas vacuoles? State their functions?

5. What is the function of a polysome?

The function of a polysome is to translate an mRNA into proteins.

6. What is the feature of a metacentric chromosome?

The metacentric chromosome has middle centromere forming two equal arms of the chromosome.

7. What is referred to as satellite chromosome?

A few chromosomes have non-staining secondary constrictions at a constant location. This gives the appearance of a small fragment called the satellite. Such chromosomes are called satellite chromosomes.

1. Discuss briefly the role of nucleolus in the cells actively involved in protein

It contains small spherical bodies which are known as the nucleolus. It is not a membrane-bound structure. It is a site for active ribosomal RNA synthesis. It also receives and stores ribosomal proteins formed in the cytoplasm.

2. Explain the association of carbohydrate to the plasma membrane and its significance.

By glycosylation carbohydrates forms glycoproteins and glycolipids. They are biochemical involved in cell recognition and adhesion.

The centromere is an organelle usually containing two cylindrical structures called centrioles. The centrioles present in a centrosome lie perpendicular to each other in which each as an organization like the cartwheel. Each of the peripheral fibrils is a triplet. The adjacent triplets are also linked.

Cell theory was given by Schleiden and Schwann which stated –

a) Bodies of all the plants and animals are made up of cells.

b) The cells are structural and functional units of life.

The modern cell theory by Rudolf Virchow is all living organisms are composed of cells and products of cells and all arise from pre-existing cells.

6. Give the biochemical composition of the plasma membrane. How are lipid molecules arranged in the membrane?

The plasma membrane is composed of proteins, lipids, water and carbohydrates. The ratio of lipids and proteins varies considerably in different types of cells. The major lipids are phospholipids that are arranged in a bilayer. They also contain cholesterol.

7. What are plasmids? Describe their role in bacteria?

Plasmids are smaller DNA present in the bacteria outside the genomic DNA. he plasmid DNA grants certain phenotypic characters like resistance to antibiotics to such bacteria. DNA is used to monitor bacterial transformation with foreign DNA.

8. What are histones? What are their functions?

Histones are highly alkaline proteins that are found in nuclei of eukaryotes. They package and order DNA into structural units. They also function as gene regulation.

1. What structural and functional attributes must a cell have to be called a

a) Cell membrane – It is the outer membrane of the cell which is made up of phospholipids primarily.

b) Cytoplasm – The liquid containing the controlled concentration of organic and inorganic compounds. They provide energy and material for reproduction.

c) Nucleus – It contains DNA, the nuclear matrix or the nucleoplasm containing nucleolus and chromatin. They can be also known as the brain of the cell which controls all the activities.

2. Briefly give the contributions of the following scientists in formulating the cell theory

Rudolf Virchow’s modern theory of cell is the cell divides and new cells are formed from the [pre-existing cells. He modified the hypothesis of Schleiden and Schwann to give the cell theory to its final.

1. All living organism is composed of cells and products of cells

2. All cells arise from pre-existing cells

In 1839, a British Zoologist Theodore Schwann studied a different type of animal cells and said that cell had a thin layer later known as the plasma membrane. He studied on plant cells and concluded that the presence of cell wall is a unique character of the plant cells.

3. Is extra genomic DNA present in prokaryotes and eukaryotes? If yes, indicate their location in both the types of organisms.

Yes, extra genomic DNA is present in prokaryotes and eukaryotes. In organisms like bacteria in addition to the genomic DNA, there is a small circular DNA outside the genomic DNA. They are called plasmids. This is a unique phenotypic character to such bacteria.

In eukaryotes, the extra genomic DNA is present in two organelles- Mitochondria and plastids.

4. Structure and function are correlatable in living organisms. Can you justify this by taking the plasma membrane as an example?

It is made up of proteins, carbohydrates and lipids. The lipids arranged with their hydrophilic polar head directed outwards and non-polar hydrophobic tails directed inwards providing fluidity to the membrane. This provides the cell membrane with its selective permeability.

5. Eukaryotic cells have organelles which may a. not be bound by

b. bound by a single membrane

c. bound by a double membrane

Group the various subcellular organelles into these three categories.

6. The genomic content of the nucleus is constant for a given species whereas the extrachromosomal DNA is found to be variable among the members of a population. Explain.

7. Justify the statement, “Mitochondria are powerhouses of the cell”

There are two membranes for each mitochondrion. They are Inner and outer membrane. The inner membrane is called the matrix. They have their specific enzymes associated with their functions. They are the sites for aerobic respiration and produce cellular energy in the form of ATP and are called powerhouses of a cell.

8. Is there a species-specific or region-specific type of plastids? How does one distinguish one from the other?

Plastids are species-specific or region-specific. They bear some specific pigments, thus imparting specific colours to the plants. According to the types of pigments, plastids are divided into three. chloroplasts, chromoplasts and leucoplasts.

The chromoplasts contain fat-soluble carotenoid pigments like carotene, xanthophylls and others are present.

b. The cell wall is present in plant cells which gives shape and protection to the cell from mechanical damages.

c. Smooth ER – It is a major site for lipid synthesis. In animal cells, lipid-like steroidal hormones are synthesized at Smooth ER.

d. Golgi apparatus – It is an important site of formation of glycolipids and glycoproteins.

e. Centrioles – The basal body of cilia or flagella and spindle fibres that give rise to spindle apparatus.

10. Are the different types of plastids interchangeable? If yes, give examples where they are getting converted from one type to another.

Yes, plastids are interchangeable in their form.

For example: Due to the replacement of chloroplast with chromoplasts the colour of green tomatoes will change from red to blue.

Cell the unit of life, talks about the basic component which is responsible for life existing in all species. It is the smallest and most fundamental unit of life which can replicate itself in all known living organisms. The largest cell in the female body is the ovum and the smallest cell in the male body is the sperm. We know that plants and animals are made of cells and can understand all the components within it.

BYJU’S is providing the content that will help CBSE Class 11 and Class 12 that will help the students comprehend the concepts in the syllabus. To clear all your doubts in Biology syllabus BYJU’S created videos and animations which will help you understand and remember the concepts for a very long period.