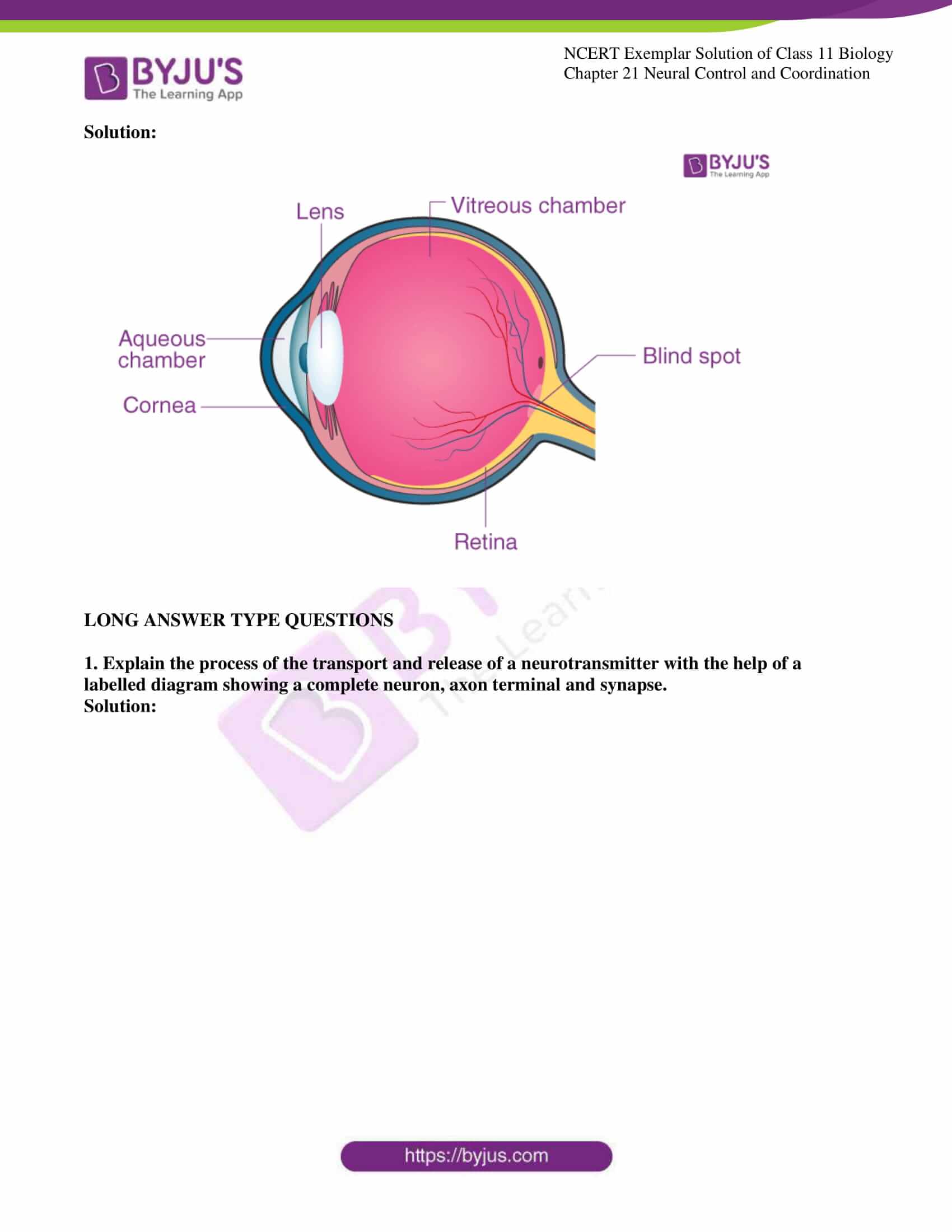 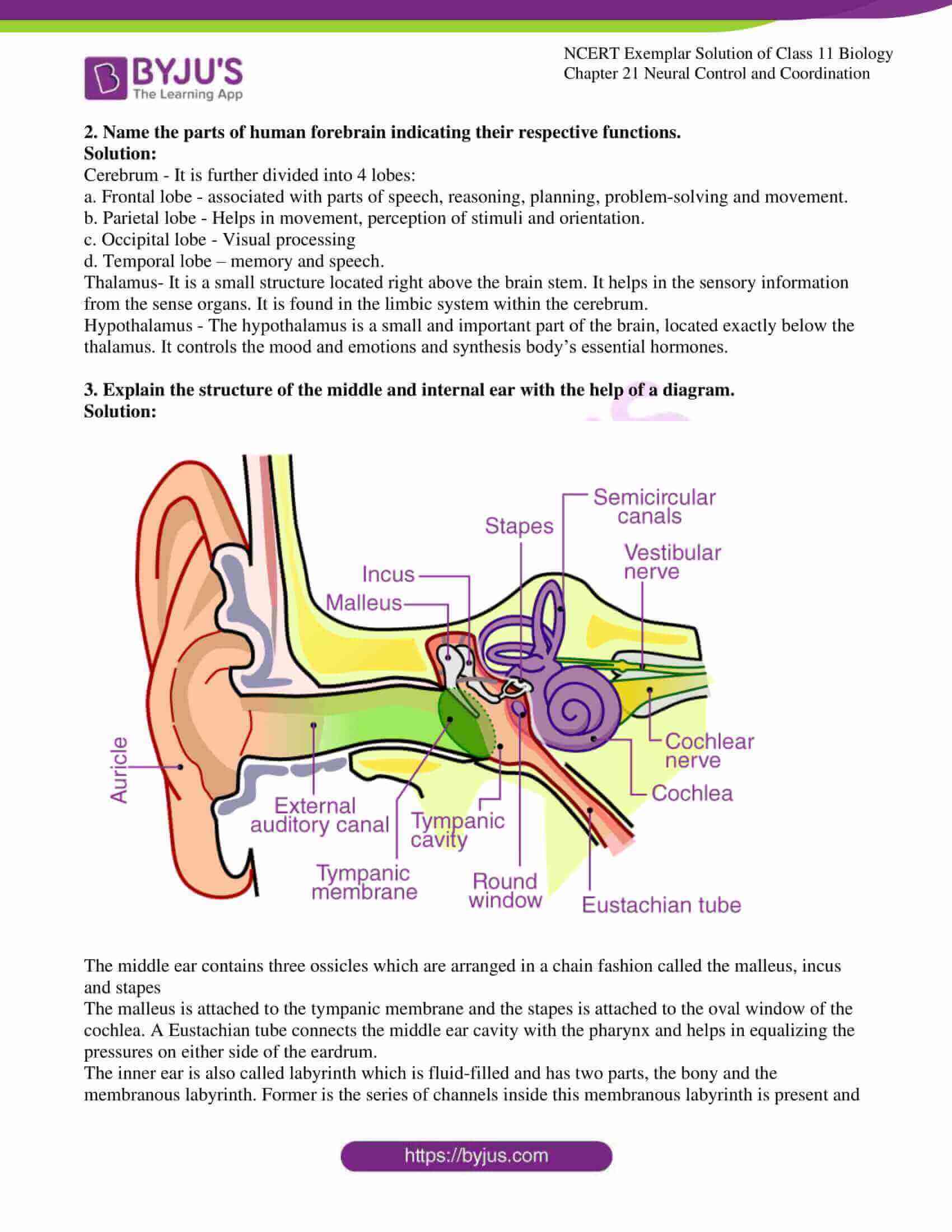 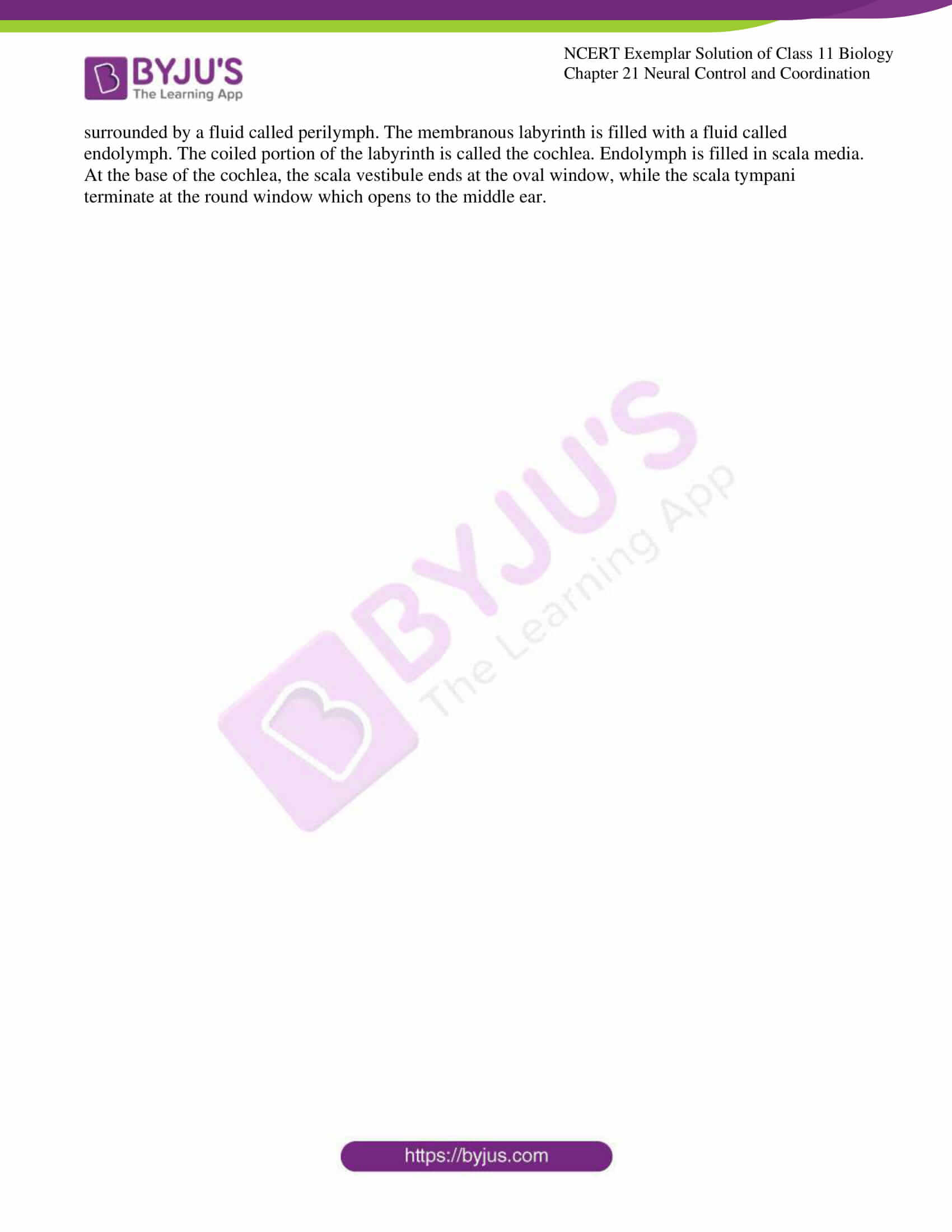 1. Chemicals which are released at the synaptic junction are called

2. The potential difference across the resting membrane is negative. This is due to

the differential distribution of the following ions

3. Resting membrane potential is maintained by

4. The function of our visceral organs is controlled by

a. Sympathetic and somatic neural system

5. Which of the following is not involved in Knee-jerk reflex?

6. An area in the brain which is associated with strong emotions is

7. Mark the vitamin present in Rhodopsin

8. Human eyeball consists of three layers and it encloses

9. Wax secreting gland present in the ear canal is called

10. The part of the internal ear responsible for hearing is

11. The organ of Corti is a structure present in

2. Comment upon the role of ear in maintaining the balance of the body and posture.

Maintaining the balance of the body and posture is done by the inner ear. There are two parts which are semicircular canals and vestibules are involved in the balancing.

3. Which cells of the retina enable us to see coloured objects around us?

The cone cells present inside the retina enable us to see coloured objects around us.

4. Arrange the following in the order of reception and transmission of a sound wave from the eardrum: Cochlear nerve, external auditory canal, eardrum, stapes, incus, malleus, and cochlea.

5. During resting potential, the axonal membrane is polarized, indicate the movement of +ve and –ve ions leading to polarisation diagrammatically. 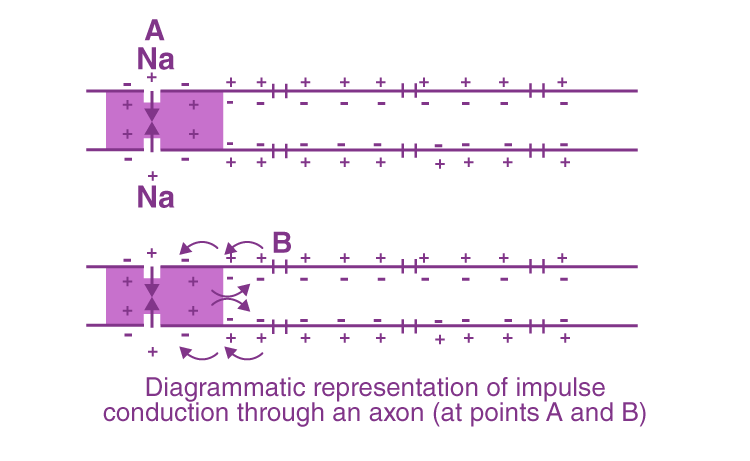 6. Name the structures involved in the protection of the brain.

The human brain is protected by the skull. Inside the skull, there are cranial meninges that cover the brain. The cranial meninges are made up of three layers, namely – Dura mater (outer layer), Arachnoid (middle layer) and Pia mater (inner layer which is in contact with the brain). Dura mater is the thick, tough, fibrous membrane. Arachnoid is a membrane with a spider-like structure. The parameter is a very thin, delicate and vascular membrane. The space between dura mater and arachnoid is called subdural space. The space between arachnoid and parameter is called subarachnoid space. It is filled cerebrospinal fluid which acts as a cushion for CNS from shock.

7. Our reaction like aggressive behaviour, use of abusive words, restlessness etc. are regulated by the brain, name the parts involved

8. What do grey and white matter in the brain represent?

White matter – Fibres of the tract are covered with a myelin sheath.

9. Where is the hunger centre located in the human brain?

The hunger centre is located in hypothalamus in the human brain.

10. Which sensory organ is involved in vertigo (sensation of oneself or objects spinning around)?

The vestibular system of the inner ear is associated with vertigo.

11. While travelling at a higher altitude, a person complains of dizziness and vomiting sensation. Which part of the inner ear is disturbed during the journey?

12. Complete the statement by choosing appropriate match among the

1. The major parts of the human neural system are depicted below. Fill in the empty boxes with appropriate words. 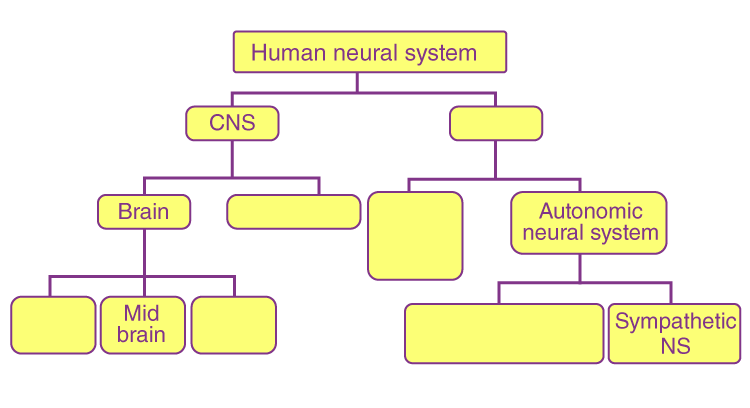 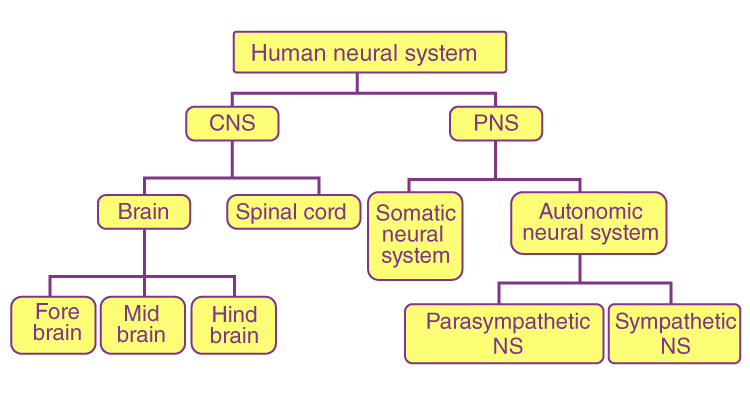 1. In computers, the input devices are mouse and keyboard while in the neural system, the sensory neurons act as input devices which take inputs from the environment.

2. The message from input devices is sent to the brain in a neural system and the CPU in computers.

4. If someone receives a blow on the back of the neck, what would be the effect on the person’s CNS?

If someone receives a blow on the back of the neck, it may lead to the dislocation of cervical vertebrae (located right below the skull).

5. What is the function ascribed to Eustachian tube?

It helps in equalizing the pressure on either side of the eardrum. It is the tube connects the middle ear cavity with the pharynx.

6. Label the following parts in the given diagram using the arrow 1. Explain the process of the transport and release of a neurotransmitter with the help of a labelled diagram showing a complete neuron, axon terminal and synapse.

Any nerve impulse is passed from one neuron to another neuron via the axon. Transport and release of a neurotransmitter occur within a synapse. At a chemical synapse, the membranes of the pre- and post-synaptic neurons are separated by a fluid-filled space called the synaptic cleft. At these synapses, chemicals called transmitters are involved in the transmission of impulses.

2. Name the parts of human forebrain indicating their respective functions.

Cerebrum – It is further divided into 4 lobes:

a. Frontal lobe – associated with parts of speech, reasoning, planning, problem-solving and movement.

b. Parietal lobe – Helps in movement, perception of stimuli and orientation.

Thalamus- It is a small structure located right above the brain stem. It helps in the sensory information from the sense organs. It is found in the limbic system within the cerebrum.

Hypothalamus – The hypothalamus is a small and important part of the brain, located exactly below the thalamus. It controls the mood and emotions and synthesis body’s essential hormones.

3. Explain the structure of the middle and internal ear with the help of a diagram.

The middle ear contains three ossicles which are arranged in a chain fashion called the malleus, incus and stapes